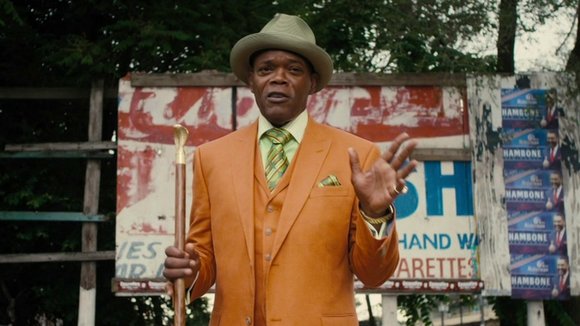 Just when we were ready to give up on Spike Lee, wouldn't you know he'd reassert his relevance with a decent inner-city drama decrying the gang violence in Chicago? Ironically, this timely tale is based on Lysistrata, an ancient play staged by Aristophanes way back in 411 BC. Set in Athens during the Peloponnesian War, that farcical adventure revolved around a headstrong female who brought an end to the hostilities by persuading the women of Greece to withhold sexual favors from their mates until peace was declared.

Spike's version unfolds in present-day Chicago where we find a gun moll named Lysistrata (Teyonah Parris) growing frustrated by the escalating body count in the Windy City war between a couple of rival street gangs. Her boyfriend, Chi-Raq (Nick Cannon), is the leader of the purple-sporting Spartans, the sworn adversaries of the orange-clad Trojans.

She gets fed up when a neighbor's (Jennifer Hudson) young daughter is caught in the crossfire during a drive-by shooting and none of the gangbangers is willing to finger the culprit for the cops. After the funeral, she enlists the assistance of sisters all over the hood in implementing a "No peace, no p*ssy," policy.

Besides borrowing Aristophanes basic plotline, I must point out that Chi-Raq's dialogue is almost entirely in verse. When was the last time you saw a movie that rhymed? The novel screenplay was co-authored by Spike with film professor Kevin Willmott, the brains behind Confederate States of America, a brilliant social satire speculating about what the U.S. would be like today, if the South had prevailed in the Civil War.

Watching Chi-Raq, the pair's experiment in iambic pentameter gets tiring after about 15 minutes or so. You feel like yelling, "Okay, you made your point. Now just let the thespians act without the burden of having to sound poetic, too.

Credit Spike for assembling an A-list cast featuring Teyonah Parris as Lysistrata and Nick Cannon in the title role.

Chi-Raq may never be confused with She's Gotta Have It (1986) or Do the Right Thing (1989), but it nevertheless represents the best adaptation of a classic into ghetto fabulous fare since the inspired reinterpretation of Romeo and Juliet as Romeo Must Die (2000).

Rated R for nudity, profanity, sexuality, violence and drug use

To see a trailer for Chi-Raq, visit: https://www.youtube.com