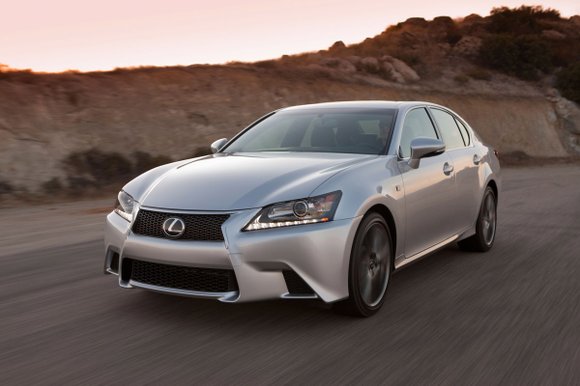 Lexus has long been known as a producer of luxury cars that were top notch in terms of quality, smoothness and for running as quiet as a sunset. But now the automaker is on a mission to put some spunk in its treads.

Much like the automaker’s effort to create a hybrid for every model it produces, Lexus is creating a sport version for most of its models. High horse-powered models from its European luxury competitors is forcing the effort.

This was more of an appearance package but there was some performance generated by the 3.5-liter V6 that made 308 horsepower and 277 pound-feet of torque. Mated to a six-speed automatic transmission, the GS drove smooth, the car was quiet and it handled well. Under hard acceleration the engine sounded a bit rough though but it was capable.

We didn’t tinker too much with the drive modes, never bothering to test the sport+ mode. We took the car out of econ and left it in normal for most of the week-long test drive. But the few times that we did put the car in sport-mode, the Lexus GS F Sport’s steering stiffened, the car held gears longer and the instrument meter lighting changed to a red background.

But there was more. In addition to a sport-tuned suspension, the GS F Sport had an AVS damping system and variable gear ratio steering system. The car reacted to driver input almost instantly, there wasn’t much play in the steering and it was really easy to drive.

The GS 350 F Sport appearance package was impressive. It had a mesh spindle grille but we wish the bumper that bisected it was hidden. The rear bumper had a distinctive exhaust diffuser and centered aero fins to help control underbody airflow. This F Sport could also be equipped with rear wheel steering but our tester didn’t have it.

Inside, the car was roomy, ergonomically correct and the interior was swathed in striated aluminum and the pedals were also aluminum. About the only thing we complained about was the placement of the heads-up-display controls. On the left side of the dash tucked right next to the three-spoked steering wheel, they could not be seen from a normal driving position.

A huge 12.3-inch information screen was embedded in the middle of the dash. It sat in a deep crevice and it was immediate that this was no touch screen. All of its information could pulled up by mouse that was placed in the center console.

Of course, the 2015 Lexus GS F Sport had a navigation system, Bluetooth, and satellite radio. It also had Entune. It was a voice enabled suite of apps that searched the internet, made dining reservations, got movie tickets and dialed up several internet radio stations including Pandora and iHeartRadio when connected to a compatible smartphone.

There were other touches of understated luxury. The analogue clock was carved from a single ingot of aluminum, the automatic climate control system detected whether there was a front passenger and directed airflow only to the occupied front seat or seats and what Lexus called the Climate Concierge automatically monitored the temperature of the three separate climate zones and adjusted not only the fans, but also the temperature of the seats and steering wheel individually.