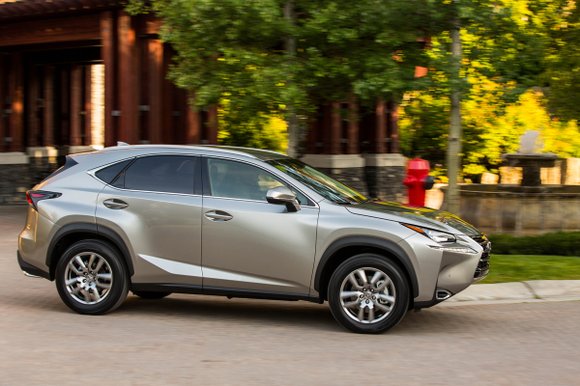 If you want to know where Lexus styling is going, just look at the NX 200t. The compact luxury crossover was one of the first vehicles to sport Lexus’ new angular concept-car-like styling, the new F Sport package and the brand’s new turbocharged four-cylinder engine.

The NX featured the more pronounced mesh one piece version of the new face of Lexus, the spindle grille. The C-pillar was angled wide, the tailgate was sharply raked and it had an integrated spoiler. The front end featured Lexus’ L-shaped light clusters with LED lighting. The sleek styling gave the compact crossover a slippery drag co-efficient of 0.34.

There were also drilled non-slip aluminum pedals. The interior styling of the Lexus NX had racecar overtones. Lexus said the NX 200t F SPORT also had Active Sound Control (ASC) to enhance the auditory experience. The engine note volume resonating through the cabin can be adjusted when the driver turns on ASC. We never tried it.

Still, the 2.0 turbocharged four cylinder moved the NX with authority. It made 235 horsepower and 258 pound-feet of torque. Mated to a six-speed automatic transmission, the combination packed some punch without being overpowering.

Lexus said to minimize turbo lag, the four-into-two exhaust manifold system pairs cylinders according to their expansion or compression stroke to reduce pumping losses and eliminate exhaust gas interference. This results in improved acceleration response and wide torque band. The turbo engine produce maximum horsepower at 4800-5,600 rpm and full torque from 1,650-4,000 rpm and up to 17psi of boost at wide open throttle. A balance shaft enhances smoothness.

The interior of the Lexus NX F Sport looks exactly like the setup in the brands newly released sport car, the RC. The center console is the focal point of the interior. Information screen is high on the dash and seemingly embedded. It deep setting in the dash creates depth and a shelf. There was metallic trim but there are five other interior trim choices.