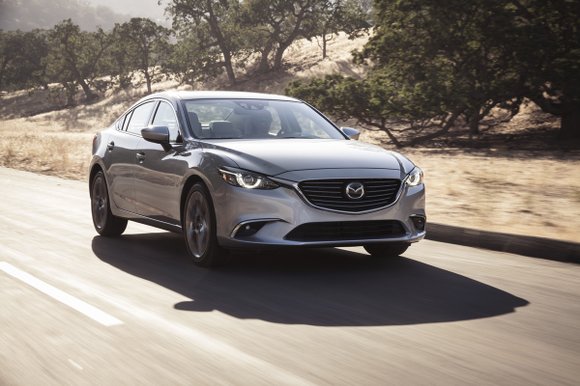 It is near impossible not to like a Mazda, in this case the automaker’s flagship sedan, the Mazda6. Swept lines and smoother curves gave the car a take a second look design.

Many noted its good looks and wanted to know what kind of car was it. That might be Mazda’s only problem, a lack of marketing money. But then again, the company sells about every vehicle its factories can churn out.

This rendition of the Mazda6 has been on the market for-two years but Mazda chose to update the car. That’s what small, quick and nimble companies can do. Amongst many tinkerings for 2016 was a new grille, fog lights surround and LED headlights. We had the touring package so those LED headlights were standard and they were adjustable.

The Mazda6 had a winged grille motif that carried through all of its exterior design. Fenders were curved over the wheel and the belt line was a bit pinched at the center of the car and then it open up as it flowed to the rear end. In a sense, the car looked like sheet metal in motion even when at a standstill.

Inside, stylists improved on what was an already a pretty competent interior. They upgraded the materials and for the intrepid, pure white leather is now available. The interior of the test car was parchment but it looked awfully white, especially at night as the interior lights came on when we approached the car with FOB in pocket.

The Mazda6 was comfortable, relatively quiet and the front-wheel-drive sedan handled well. There was plenty of room in the front seats, two adults could get in the car and not touch elbows. The back seats were surprisingly spacious given the cars sloping roof line. It looked as though two adults would have plenty of head and hip room and could ride in comfort.

The car was powered by a 2.5-liter four cylinder engine that made 184 horsepower and 185 pound-feet of torque. The test car had what Mazda called the i-ELOOP brake energy system for improved fuel economy. The 2016 Mazda6 with this system had a fuel economy rating of 28 mpg in the city, 40 mpg on the highway and 32 mpg combined.

This engine was quiet, responsive and it had some pep. However, when we put some pressure on the metal it did get kind of loud. But in defense of Mazda’s engineers, the car was still cold. We’ve got to go across town so it will be tried again. After the car had warmed-up, it was quitter.

Armed with Mazda’s SkyActiv technology that lessens noise, vibrations and harshness, the tester had the ambience of a more expensive sedan. It didn’t hurt that among its equipment was door trim plates, rain sensing wipers, heated side mirrors, blind side alert, parking assistance, paddle shifters, rear view camera, keyless entry, a moonroof, satellite radio, an infotainment system and more.

The equipment and the package made the 2016 Mazda6’s base price of $30,195 awfully reasonable. Even after adding options and freight charges, the sticker came to $33,605. That’s not bad for a high quality sedan that has some exclusivity. In other words, you’re not going to see the 2016 Mazda6 parked in every other driveway.