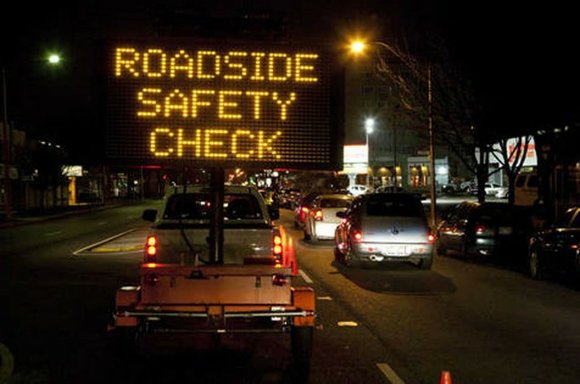 A roadside safety check will be conducted by the Will County Sheriff's Office on Sept. 5 to ensure drivers are complying with state law on such issues as driver's licenses, seat belt usage and drunk driving.

Illinois Secretary of State Jesse White is reminding motorists who are celebrating during the holiday season to be sure to drive safely and don’t drink and drive.

“Drunk driving causes death and injury on our roadways every year during the holidays,” White said. “Let’s keep the roads safe for our loved ones and others by driving sober.”

• In 2014, from Christmas Eve to Christmas Day, there were seven driving fatalities, three (42 percent) of which were alcohol-related in Illinois, according to the Illinois Department of Transportation (IDOT).

• In 2014, five of the 10 fatalities (50 percent) were alcohol-related from New Year’s Eve to New Year’s Day in Illinois, according to IDOT.

• Ninety-three percent of all drivers arrested for DUI lost their driving privileges, according to the Illinois Secretary of State’s Office.

• Eighty-six percent of all drivers arrested for DUI are first-time offenders, according to the Secretary of State’s Office.

• The rate of alcohol impairment among drivers involved in fatal crashes is 4.5 times higher at night than during the day, according to the National Highway Traffic Safety Administration (NHTSA).

• An average of one alcohol-related fatality occurs every 53 minutes, according to NHTSA.