Lewis Uses Strong Second Half To Close Out Rockhurst 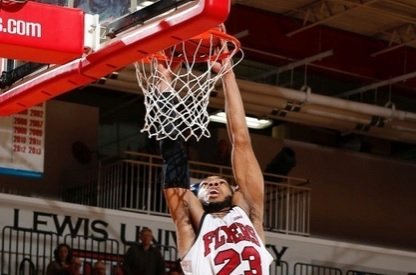 The first half of Saturday's Great Lakes Valley Conference men's basketball match-up between Lewis University and Rockhurst University featured 17 lead changes, but the second half was all Flyers.

Lewis outscored Rockhurst 22-10 to open the final 20 minutes and earned the 85-65 GLVC win over the host Hawks, extending its winning streak to four games, at Mason-Halpin Fieldhouse.

"We played a very good second half today," Lewis head men's basketball coach Scott Trost said. "Max (Strus) was very good and I thought Julian (Lewis) was fantastic in the second half.

"This was a very good weekend with two road wins."

Lewis returns to action on Thursday as they welcome Drury to Neil Carey Arena for a 7:30 PM tip-off.