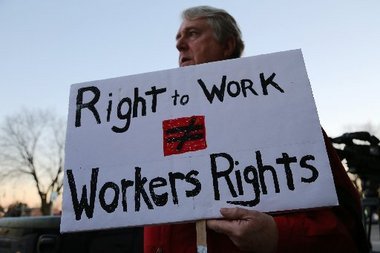 Illinois residents strongly support keeping the state income tax at 3.75 percent and support a Right-to-Work law, according to a poll commissioned by the nonpartisan Illinois Policy Institute.

The poll found that less than one quarter of Illinoisans are open to increasing the state’s income-tax rate to 4.25 percent, up from the current 3.75 percent – a proposal that has been floated in the Illinois Statehouse. More than 60 percent of Illinoisans support the principles of a Right-to-Work law, which gives workers the freedom to choose if they want to be in a union at their workplace. And the poll, conducted by Odgen & Fry, found that one month into his first term, more people have a favorable view of Illinois Gov. Bruce Rauner than an unfavorable view.

“What the results of this poll convey first and foremost is that Illinois residents will not tolerate a tax increase, and they absolutely are right to feel this way. A lack of revenue is not Illinois’ problem – it’s state government spending that has been out of control,” said Kristina Rasmussen, executive vice president of the Illinois Policy Institute. “The 2011 tax increase generated more than $31 billion for state coffers, yet the bill backlog remains and politicians still weren’t able to make ends meet. Illinoisans agree it’s time for a new approach that doesn’t involve taking more from hardworking residents.”

Results from the poll: