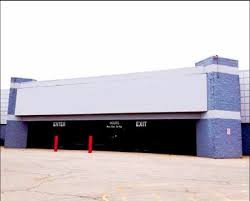 The former Walmart store on Larkin Avenue has been sold and will be converted into a storage facility. www.loopnet.com

The sale of the former Walmart store on Larkin Avenue in Joliet, shuttered for eight years, has been finalized, clearing the way for the building to be converted into a storage facility by DealPoint Merrill.

The sale of the 116,134-square-foot structure at 305 S. Larkin Ave. was announced by DK Mallon, which represents Walmart's "excess" buildings in Illinois. Walmart closed the store when it built a new retail facility at 2424 W. Jefferson St. in 2007.

The Joliet City Council approved the conversion of the empty storefront into a storage facility in January.

It's the second of two long-empty buildings in that strip mall to finally be purchased for new use. The other, a former Cub Foods store at 191 S. Larkin Ave., was bought by Harvest Bible Chapel last year and is being converted into a new church for the congregation.