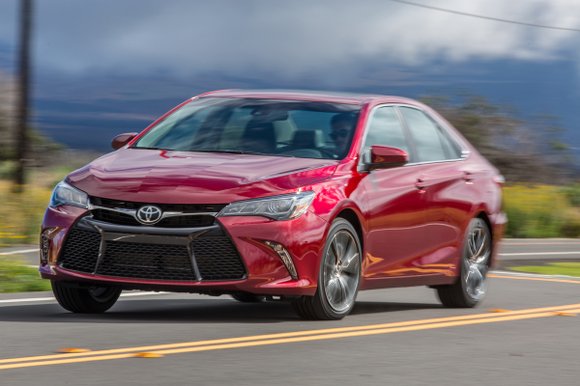 The Toyota Camry has been the bestselling car in the United States for 12 years. Ten point two million have been sold and more than half, 6.6 million, are still on the road. So why change it?

We never got a definitive answer. Explanations like we made it more premium, more fun to drive or more emotional were tossed around but that doesn’t really answer the question. That tells what was done, not why it was done.

A reasonable guess is that the competition is getting better and in an effort to stay in front of the pack it was decided to improve the Toyota Camry now rather than later when it might be too late.

The oomph remained the same. There was four a cylinder-engine that made 178 horsepower and 170 pound-feet of torque. It got 25 mpg in city driving, 35 mpg on the highway and 28 mpg combined.

The V6 made 268 horsepower and 248 pound-feet of torque. It got 21 mpg in the city, 31 mpg on the highway and 25 mpg combined. Both engines were mated to six speed automatic transmissions. The Hybrid still put out a combined 200 horsepower generated by its electric motor and 2.5-liter four cylinder engine.

That is about all that went unchanged on the 2015 Toyota Camry. The automaker made about 2000 adjustments on the latest model. All of the changes were designed to improve the car’s riding characteristics, styling and its interaction with drivers and passengers.

To improve the 2015 Camry’s ride, Toyota reinforced the body structure with more spot wells to better rigidity. They stiffened the suspension and widened the track to get more responsive handling.

On short test routes here the car did handle better, turn-ins were crisper and the suspension seemed sturdier. It was hard to tell whether resistance to noise, vibration and harshness had been improved; in this part of the country the roads were smooth, elevation was nonexistent and surfaces were pretty homogenous.

Toyota also wanted a Camry that was more expressive. So they gave the 2015 edition a new bumper and an attention grabbing grille. The character line was more prominent and it extended from the front fender flares through the doors and through the rear quarter panels. The car did look good and the design was expressive; that was something really new for any Toyota.

It would be foolish to make these sorts of changes to the substructure and to the exterior of the Camry without improving the interior. Designers restyled the center stack, they installed a 4.2-inch TFT screen between the gauges and they installed some soft touch surfaces on the dash. A quick tactile test revealed that they could have been softer but it was a step in the right direction. And as with any competent mid-size sedan, the back seat was spacious and capable of carrying average size adults in comfort.

Toyota upped the ante in terms of equipment too. The 2015 Camry can be outfitted with a wireless charging system for cell phones.

It also tightened the seals on windows and doors and increased insulation to make an already quiet Camry quieter for 2015. It worked; we never heard the engine or the transmission during normal surface street driving; no matter what trim line we tested, all that was heard was the sound of the car cutting through the wind.

With the new Camry, Toyota has served notice that it is becoming more aggressive in terms of styling, engineering and equipment. That could be bad news for its competitors.