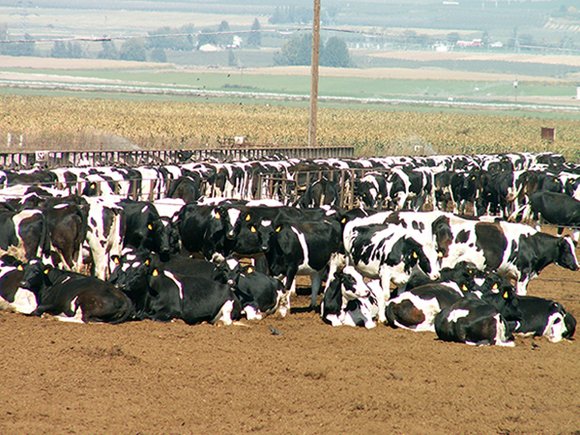 According to the EPA, there are more than 450,000 Animal Feeding Operations (AFOs) across the United States like the one pictured where animals are kept and raised in confined situations. Since antibiotics are necessary to keep disease at bay, AFOs are breeding grounds for antibiotic-resistant bacteria, much of which can get transferred to consumers who eat meat. Socially Responsible Agricultural Project, Flicker CC

Dear EarthTalk: How is it that antibiotics are being “overused,” as I’ve read, and what are the potential consequences?

The development and widespread adoption of so-called “antibiotics”—drugs that kill bacteria and thereby reduce infection—has helped billions of people live longer, healthier lives. But all this tinkering with nature hasn’t come without a cost. The more we rely on antibiotics, the more bacteria develop resistance to them, which makes treating infections that much more challenging.

According to the U.S. Centers for Disease Control and Prevention (CDC), overuse of antibiotics by humans—such as for the mistreatment of viral infections—means these important drugs are less effective for all of us. Besides the toll on our health, researchers estimate that antibiotic resistance causes Americans upwards of $20 billion in additional healthcare costs every year stemming from the treatment of otherwise preventable infections.

A bigger issue, though, is our growing reliance on feeding antibiotics to livestock for growth promotion, weight gain and to treat, control and prevent disease. This increasingly common practice is a significant factor in the emergence of antibiotic-resistant bacteria, which the U.S. Food & Drug Administration (FDA) acknowledges can get passed onto humans who eat food from treated animals. The non-profit Environmental Working Group (EWG) reports that the majority of the ground beef and ground turkey sold in the typical American grocery store contains antibiotic-resistant bacteria.

Last year, 26 animal pharmaceutical companies voluntarily complied with an FDA request to re-label medically important antibiotics used in food-producing animals to warn against using them for growth promotion and weight gain. FDA also recommended that medically important antibiotics be prescribed by licensed veterinarians and only to treat, control and prevent disease. “We need to be selective about the drugs we use in animals and when we use them,” says William Flynn of the FDA’s Center for Veterinary Medicine. “Antimicrobial resistance may not be completely preventable, but we need to do what we can to slow it down.”

Still some worry that the FDA’s action doesn’t go far enough, given that farmers will still be able to administer antibiotics to their livestock for disease prevention. The fact that more and more livestock operations are switching over to Animal Feeding Operations (AFOs) whereby animals are confined in crowded enclosures (instead of allowed to graze at pasture) means that antibiotics will play an increasingly important role in disease prevention.

For its part, the FDA argues that since veterinarians need to authorize antibiotic use for disease prevention, farmers and ranchers are less likely to overuse antibiotics for their livestock populations. The same can be said about doctors’ limiting the prescription of antibiotics for their human patients, but only time will tell whether such newfound restraint is enough in the fast evolving arms race between bacteria and our antibiotics.

Of course, consumers can do their part by avoiding antibiotic medications unless absolutely necessary and eating less meat (or giving it up entirely) to help reduce demand.