Wayne's Words: Time for some serious changes at the Rialto 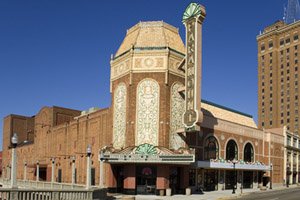 The Paramount Theatre in Aurora.

Now that the disagreement over the Rialto Square Theater marquee renovation has resulted in the withdrawal of the $350,000 donation, questions are being raised about what to do next.

The Rialto governing board, the Will County Metropolitan Exposition Auditorium Authority, now has a larger financial problem because production of the marquee moved forward before public reaction was measured and required vetting was completed.

The announcement of the donation and the introduction of the marquee rendition followed the actual start of building the marquee. The whole process seemed so desperate. According to published reports, a compromise decision scheduled for a meeting last Thursday was not finalized until hours before the item was added to the agenda.

According to section 2.02(a) of the Open Meetings Act, the agenda is to be available at least 48 hours in advance of a meeting. The public was again not informed of a potential compromise in a timely fashion. Even the governing board did not feel comfortable reacting so quickly and tabled a vote on the compromise until a later date.

He said he had requested to “see the books” before any additional funding requests were made concerning the $600,000 subsidy provided to the Rialto each year. He backed off of that request because, he said, there were no additional funding requests made. A letter was sent to the council from the Rialto governing board but it did not arrive until after the city budget was passed for 2015.

The mayor should have followed up on his request. Why is the Rialto in such tight financial straits? Why is there no reserve fund to renovate the marquee or repair and renovate any aspect of the theater? The answer is not what anyone wants to hear.

Quite simply theater management does not put enough people in the seats. The theater is “dark” most days of the year. Unlike Silver Cross Field, which also lacks “fans in the stands,” the theater has heat and air conditioning, so it can be used year-round.

According to the Rialto website, salaries and benefits comprise more than $1.5 million of the $4 million 2014 WCMEAA budget. Rental of Rialto property brings in just over $1 million per year. Almost half of the rental revenue comes from the separate Two Rialto Square building. Sponsored events, including concessions, generate $2.2 million in revenue. Rialto management takes in approximately $3.5 million revenue. Expenses exceed revenue by over $600,000 according to the 2014 budget. The $125,000 spent on the yet to be completed marquee adds to that deficit.

What will the Rialto do with such a bleak financial future? The options in the short term are limited. It is clear the current marketing model to generate revenue is not working.

Just up the road a piece is the Paramount Theatre in Aurora. Four years ago the Paramount changed its management model from one similar to the Rialto’s current form to one that includes a production company that now offers a Broadway Series that is produced in-house. The results have been, to say the least, remarkable.

The Paramount’s entire audience count during the 2010-11 theater season was 54,000 people. The audience for “Mary Poppins,” the third show of five for the 2014-15 Broadway Series, was 62,000 people, according to published reports. The show had 40 performances over approximately 30 days.

The fourth show in this year’s series, “Tommy,” is expected to draw an audience of at least 40,000 people. According to sources, the Paramount’s audience will exceed 200,000 people with more than 200 performances during the 2014-15 theater season.

According to the Paramount’s website, the average ticket price for the Broadway Series is $27. Using simple math, that’s over $5.4 million in ticket sales.

By the way, the capacity of the Paramount Theatre is 1,888 seats. That is 78 fewer seats than the Rialto. In addition to the Paramount’s Broadway Series, the theater also hosts other shows for one or two performances. Every Monday is Movie Night for $1. The theater also rents the facility for private commerce, including weddings and corporate events. The theater is seldom “dark.”

The current marketing model of the Rialto is unsustainable. If current management cannot move the Rialto to a sustainable financial model, they should be replaced.

The Rialto is a Joliet asset. Business should be conducted to provide economic success while maintaining the Rialto’s desirable character. The city of Joliet and the region’s residents should expect no less. Stay tuned…