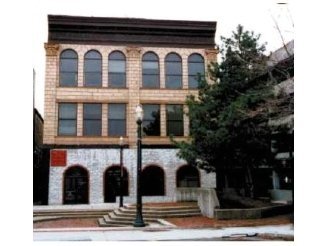 "The educational experience of USF students is very much aligned with the values of Robert W. Plaster. As Mr. Plaster understood and valued hard work and education as the key to success, so, too, do University of St. Francis students and faculty," said Johnson.

"Also, just as Mr. Plaster was the first in his family to attend college, USF is proud to regularly welcome freshman classes of which more than 60 percent are first-generation college students. In light of these shared values and the connections between the missions of USF and that of the Plaster Foundation, we are very pleased to name this building in downtown Joliet in honor of Mr. Plaster."

Plaster’s success is evidence of his hard work and perseverance—from his boyhood paper route and grocery store job to work for the U.S. Treasury Department and later a propane company—that led to his own start-up business, Empire Gas Corporation, in 1963. Empire Gas rapidly became one of the largest retail LP gas distributors in the United States and was listed on the New York Stock Exchange.

Plaster was also co-founder and active supporter of Enactus, at that time known as Students in Free Enterprise. USF’s College of Business & Health Administration recently established a chapter to become a member of Enactus’ worldwide network of students, academic professionals and industry leaders.

"After achieving financial success my father felt very strongly that he wanted to help open educational opportunities for young people," added Clement. "To that end, in 1983, he established the Robert W. Plaster Foundation which is dedicated to helping students by funding projects for colleges and universities, such as this University of St. Francis enterprise, the former Mode Theater Building, now a state-of-the-art learning environment."

The University of St. Francis opened the former Mode Theater building in August 2014 after a $2.7 million interior and exterior renovation of the 18,000-square-foot building, including classrooms, a courtroom for mock trial activities, student study and leisure space, computer labs and offices. A business incubator is a major feature of the building and will support USF’s undergraduate and graduate

The University of St. Francis Board of Trustees approved the building naming in October, noted Johnson.