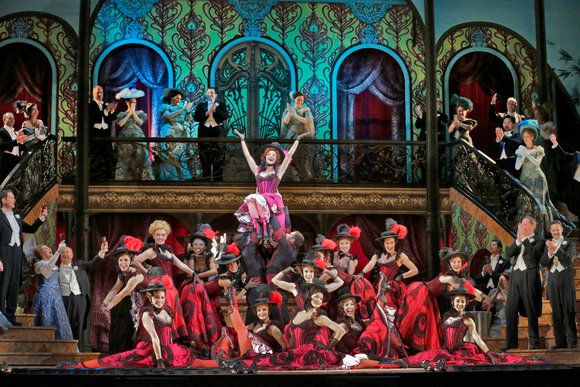 Met Live HD audiences are in for a real treat Wednesday, January 21 at 6:30pm local time. That's when they'll have an opportunity to see the Encore Presentation of Franz Lehar's The Merry Widow starring Metropolitan Opera's premiere soprano Renee Fleming as the flamboyant Hana Glawari.

The lavish production is a perfect melding of grand opera and the Broadway stage with new staging by Broadway veteran Susan Stroman (The Producers, Oklahoma) and a brilliant performance by five-time Tony nominee Kelli O'Hara as Valencienne in her Met debut. The cast is rounded out by Met favorite Nathan Gunn in the co-starring role as her suitor Count Danilo and the classy Sir Thomas Allen as the comedic diplomat Baron Mirko Zeta.

Conductor Sir Andrew Davis seems to relish Franz Lehar's lush score and with Stroman's choreography and a considerable amount of ensemble dancing by both the company's marvelous ballet troupe and the cast of singers, the entire production floats along like a sky of billowy clouds.

The final act at Chez Maxim is a glimpse at Paris's Belle Epoque, with Fleming at her best as the beguiling widow, who attempts to take Paris by storm. The mood throughout the performance is light. For those who are looking for a ray of sunshine in the gloom of winter, the Met's production of The Merry Widow is the perfect tonic. The U.S. Encore is Wednesday, January 21 at 6:30pm local time with the Canadian Encore Saturday, February 28 at 12 pm local time and Monday, March 2 at 6:30pm local time. The Merry Widow continues live on the stage of the Metropolitan Opera House in Lincoln Center, New York City through May 7. For tickets and information, visit metopera.org or fathomevents.com.