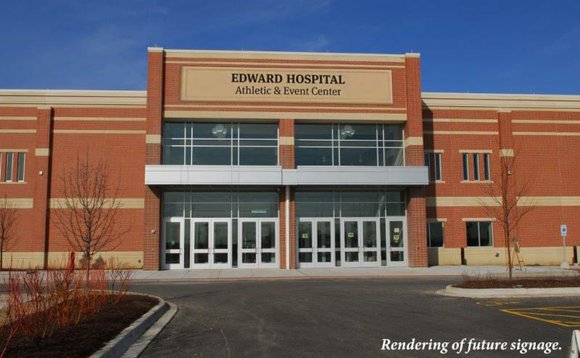 The Romeoville Village Board is expected to approve a five-year deal Wednesday night to give Edward Hospital the name rights to the village's athletic and events center. Village of Romeoville

Romeoville trustees approved a five-year deal with Edward Hospital Wednesday for the exclusive naming rights to the village's Athletic and Events Center.

The contract, worth $500,000, will give the Naperville-based health care chain the naming rights for the facility through 2019. Under the terms of the deal, the village will receive annual payments of $100,000, with the first due Feb. 22.

Edward will also lease about 1,600 square feet of space inside the 55 Phelps Ave. facility for a rehab center and will have naming rights for one of basketball courts inside.

The village’s name will remain on signage inside the facility and in a less prominent spot on the front façade and other entrances of the building, Village Manager Steve Gulden said. Edward will pick up the tab for the new sign on the outside, while the village will pay for any change in signage inside.

“This really does fit naturally with the center,” Noak said.

Gulden said the village looked at naming rights packages offered by other regional facilities in order to calculate the value of the five-year deal before advertising to potential suitors.

“There was some methodology behind it,” said Gulden, who noted ATI Field at Joliet Memorial Stadium as one example.

Village officials have touted the center as a catalyst of renewed economic development along its Route 53 corridor. Noak said the naming rights and rehab facility inside the center would continue that goal of drawing new visitors to the village.

“There’s going to be people coming to Romeoville for things other than tournaments,” said Richards.