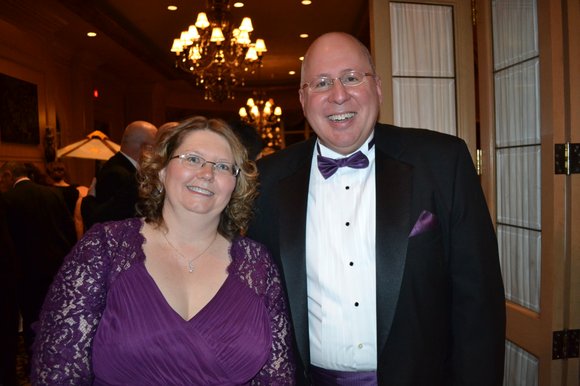 One of the oldest charity events in the Will County area, is now one of its most successful. The 58th Caritas Scholarship Ball. held Saturday, January 24 at the prestigious White Eagle Golf Club, raised more than $350,000 for student scholarships for the University of St. Francis (USF) scholarship fund, according to USF President Arvid C. Johnson and event chairs Candice & Steve Rosen.

For the third consecutive year, the Caritas Scholarship Ball has reached a fundraising record. "We are very excited that our community believes in the USF mission and supports our goal of providing high-quality education to as many students as possible," said President Johnson. "About 96 percent of USF students receive some form of financial assistant and 62 percent of freshmen this fall were the first in their families to attend college."

Among the 360 guests were a number of alumni, including those who enrolled in the university as adults in order to complete their education and improve their lives. Their success was made possible by scholarships from the Caritas Scholarship Fund. Several current freshman student scholarship recipients were also in attendance.

The event featured both a Silent and Live Auction gaveled by professional high-impact charity fundraising auctioneer David A. Goodman of Auction Results of Chicago. Among the items offered was a once-in-a-lifetime visit with His Holiness, Pope Francis at the Vatican, including a five-night hotel stay at the Hotel De Petris in central Rome, courtesy of event chairpersons Candice and Steve Rosen.

One of the highest bid items at the Live Auction was a Five Star signature wine collection entitled Never Again Whine About No Wine which included a commemorative limited edition wine of which only 60 bottles were made, from the famed Frescobaldi winery in Tuscany, Italy. The wine was shipped to the event directly from the Frescobaldi family in Florence. The high bidder for the package, which included a gourmet wine pairing dinner in the elegant dining room at White Eagle Golf Club catered by the club's award-winning chef and knowledgeable staff, was USF alumni Rob Carr, a retired businessman, who won the bid at $10,000. Carr also successfully achieved the highest bid of the evening, $24,000 for a pair of Taylor Swift concert tickets at the United Center with VIP seating and an autographed guitar from the artist. "Just say that I'm from the self-named 'giving it back' foundation," Carr modestly said of his generous bid.

Lucky Live Auction bidders also will enjoy Chef Katherine's Fabulous French Adventure at the local, but internationally famed chef's 400 year old farmhouse, which was once part of a Chateau dating back to the 12th century along with a tasting of wines from the best Domaines in Burgundy. Sports fans will enjoy Super Golf with Super Bowl Shufflers former Chicago Bears Quarterback Jim McMahon and 'Bermuda Triangles' linebaker Otis Wilson along with USF alumnus Bill Bellah at the super exclusive Rich Harvest Farms, rated by Golf Digest magazine as one of America's 100 Greatest Golf Courses.

Co-chairs for this year's Caritas Ball were Mike and Kathy LaRocco. The event was supported by Wintrust Commercial Banking, Joliet Bank and Trust as the gold-level sponsor. Longtime supporters Dorothy and the late LaVerne Browne provided a silver-level sponsorship. Mistress of Ceremonies was Mary Ann Ahern of NBC 5 News Chicago who has gained recognition for her coverage of the religion beat, including reporting from Rome on the election of Pope Francis.