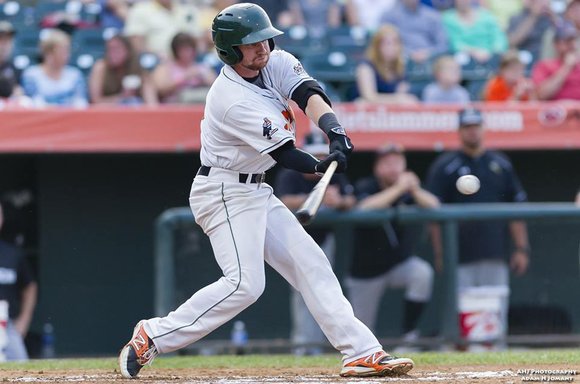 The Joliet Slammers (22-30) score five runs in the ninth inning, but needed six in their 9-8 loss to the Evansville Otters (34-18) on Friday night.

The Slammers scored first against one of the league’s best lefties, Efriain Nieves. CF Charlie White singled up the left-field line to lead off. SS Alfredo Rodriguez later drove him in with an RBI double. Rodriguez would score on a 1B Carlos Lopez single, making it 2-0 Slammers after the top of the first.

The Otters answered with two runs against Kevin Walter in the bottom of the inning. LF John Schultz led off the inning with a double and 2B Josh Allen was hit by a pitch. That put two on for the cleanup hitter C Dan Phillips. Phillips doubled to left, driving in a pair to tie the game at two. Walter got out of the inning with back-to-back outs.

The Otters added on with a pair of runs in the second. RF Jeremy Nowak led off the inning with a double. With two outs Schultz walked before 2B Josh Allen cracked a two-RBI double, putting the Otters on top 4-2.

After the Otters added a run in the third to extend their lead to 5-2, Phil Bates blasted a solo homer to left in the fourth. Bates second homer of the year cut the Otters lead to 5-3.

Evansville ran Walter from the game with a pair of runs in the fourth inning. With the bases loaded, C Dane Phillips doubled, driving in two and putting the Otters up 7-3. Adam Panayotovich came on in relief for Walter and got the Slammers out of the inning.

The Otters tagged Panayotovich for a pair of runs in the fifth. With two outs DSH Kurt Wertz Jr. singled and SS Cory Urquhart homered to make the score 9-3 Otters.

It started with a Lopez single against pitcher Lance Phillips. With one out, C Jack Cleary cracked a base-knock and so did RF Casey Fletcher, loading the bases. 2B Max Casper hit a bouncing ball that 3B Dean Wilson misplayed, scoring two. A White single scored Fletcher, cutting the Otters lead to 9-6. DH Nate Roberts walked to load the bases. Sam Klein pinch ran for him.

With closer Edgar Lopez now in, Rodriguez single to score Casper and White, cutting the Otters lead to 9-8. 3B Mike Garza smoked a line drive that was caught by the SS Urquhart. With a pair in scoring position and two outs, Lopez hit a sharp ground ball to the left side of the infield. Dean Wilson made a diving stop and threw out Lopez by a step, giving the Otters the 9-8 win.

Kevin Walter (1-5) took the loss while Lopez earned his league-leading 16th save. The Merchants and Manufacturers Player of the Game was Alfredo Rodriguez.

Notes: Mike Garza extended is road hit streak to sixteen games with a double in the sixth inning…Carlos Lopez singled and drove in a run in his first at bat as a Salmmer…Joliet is now 5-6 against lefties this year…Kevin Walter has given up seven runs twice this year, both times against the Otters…Jack Cleary recorded his sixth multi-hit game of the year and his second three-hit game…Charlie White notched his thirteenth multi-hit game… The Slammers recorded 15 hits in the game, their third most this year…The Joliet Slammers take on the Otters in game two of the series with the first pitch at 6:35pmCT on Saturday.