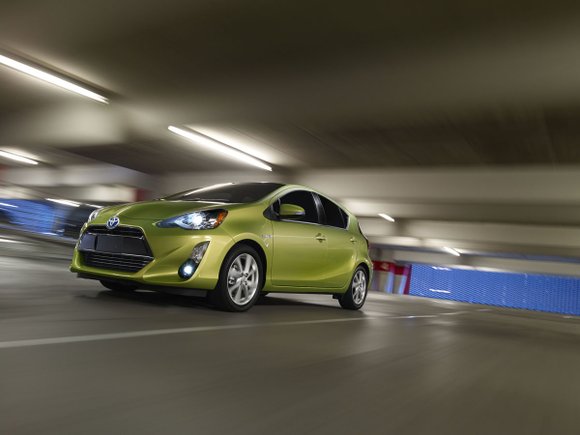 The Toyota Prius has been around for 15 years.

It was the first hybrid on the U.S. market and it caused most major manufacturers to develop hybrids of their own. In other words, the Prius aided by Toyota marketing mite dragged the auto industry into gasoline electric power trains.

To celebrate its 15th year in the market, Toyota has developed a special edition. It comes in two colors: Absolutely Red or Blizzard Pear. There are 17-inch wheels with a dark metal finish. The interior is trimmed with black SofTex® seats and dark gray stitching.

The special edition also has blue foot well illumination, dark chrome accents on the door grips, steering wheel and shifter. The side mirrors include turn signals.

We didn’t have the special edition and we didn’t need it. Our Prius was more than good enough. Our test vehicle got 51 mpg in the city, 48 mpg on the highway and 50 mpg combined. It had the same amount of interior space as a midsize sedan.

We had the Prius Three model; the nameplate has grown to include four models. In addition to the Three, there is a Two, Four and the Five. Although our test car had the interior room of a midsize sedan, at 176.4-inches bumper to bumper it could get into compact only parking spaces. But because of its 93.7 cu. ft. of interior space and 21.6 cu. ft. of trunk space, it is classified as a midsize car by the EPA.

But those are numbers. They give no indication of the ambience of the Prius Three’s interior. It was spacious, stately and it was silent; an attribute of a quality build. The instrument panel was embedded at the base of the windshield in the dashboard. There was a speedometer and readout for the hybrid system that let the driver know when the car was charging, exerting energy and what was its driving mode.

The Prius’ hybrid system combined a 1.8-liter Atkinson cycle four-cylinder engine and an electric motor. Together they generated 134 horsepower and the car had a continuously variable transmission. Our test car could run on the gasoline engine alone, the battery alone or a combination of both.

This car almost demands a demure drive. Acceleration wasn’t blistering by any means. But if you know the personality of what you’re driving then you know aggressive posturing in the Prius is a waste of time. It doesn’t have the oomph to pull it off.

Regenerative braking recaptured energy when decelerating and sent it to the battery. Toyota said he helped reduce fuel consumption. The exhaust heat recirculation system reduced heat waste by warming engine coolant during cold startup, although it wasn’t really cold during our test drive.