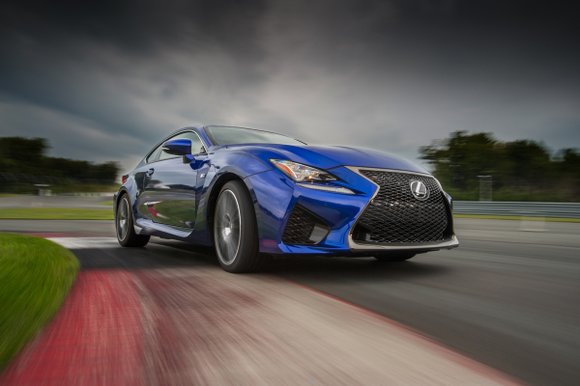 For years Lexus sold vehicles on the strength of the brand. Build quality was outstanding, fit and finish was almost perfect and its customer satisfaction became an industry benchmark.

But during our week-long test drive of the 2015 Lexus RC 350 Coupe F Sport, we were hailed several times by drivers who told us they loved the way the RC looked. The bottom line is that Lexus finally has a car that earns it street creds, not just brand admiration.

The RC is a 2+2 coupe with a compact cabin. It had fender flares and body contours etched with sweeping lines. The roof bulges slightly but that is to accommodate taller drivers and passengers.

In fact, the car really didn’t feel cramped; it was very spacious and there was plenty of headroom. Lexus borrowed from its IS and GS sedans to create a new platform for the RC. The wheelbase was 107.5 inches, overall the car was 184 inches long and 54.9-inches tall and 72.4 inches wide.

The headlamps sat high on each side of the spindle grille which was more pronounced on our test vehicle. The LED formed an angular L which has become Lexus’ signature frontal look. And Lexus also used LED lamps in the taillights with lens technology that gave them a sparkling effect.

There are three trim line of the RC: the RC 350, the RC 350 F Sport and the higher performance RC F. We had the sport and it was more than enough car for everyday driving. Though you might want to consider finding a garage for the rear-wheel-drive coupe when snow starts hitting the ground.

The RC F Sport is more of an appearance package since it has the same engine as the RC 350. Still its 306 horsepower V6 engine provided more than enough oomph. It made 277 pound-feet of torque and it was mated to an eight-speed automatic transmission.

Though less power than the 467 horsepower V8, our test car made up for it in fuel economy. The car had an EPA rating of 19 mpg in the city, 28 mpg on the highway and 22 mpg combined.

The F Sport had four drive modes: Eco, Normal, Sport S and Sport S+. The car will adjust the suspension, throttle response and the electric power steering according to what drive mode is selected. It will even adjust the air conditioning.

The RC 350 F Sport had rear-wheel-steer. It enhanced handling and gave the car a sure treadedness. The coupe was responsive, it cornered well, the suspension ranged from firm to stiff, depending on the drive mode selected, and the Lexus RC was very easy to drive.

Unlike a lot of performance coupes, the interior of the 2015 RC 350 F Sport didn’t feel like a cocoon. It was spacious, there was plenty of headroom and the car could be used as an everyday driver.

Part of its sports package was 19-inch, 10-cross spoke wheels. But that was just the beginning. Our tester was equipped with a sunroof. It had a navigation system, Bluetooth, satellite radio, a backup camera with cross traffic alert. Once, it even alerted us to pedestrians crossing our path as we started to back up in a parking lot.