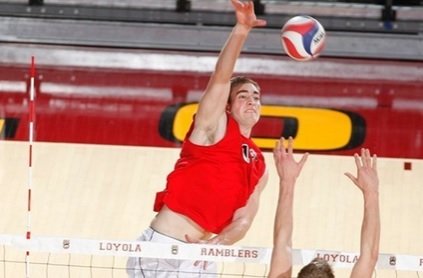 A career-high six aces for senior Eric Fitterer, including back-to-back aces to end the match, helped No. 2 Lewis men's volleyball defeat No. 1 Loyola 3-1 (25-21, 22-25, 25-22, 29-27) on Monday evening at Gentile Arena. "We talked about as a team bringing great service pressure tonight and I think Fitt epitomized it for the whole match," Lewis head coach Dan Friend said. "He was the best scoring rotation the whole match. To put the game in his hands and see him take that opportunity is impressive as a coach and just an observer."

The win improves Lewis to 15-1 and 6-0 in Midwestern Intercollegiate Volleyball Association play. Loyola falls to 13-1 (5-1 MIVA). The win for Lewis snaps Loyola's 40-match winning streak dating back to last season. Loyola's last loss was Jan. 4, 2014 to USC. The match featured 43 ties and 18 lead changes. The fourth set alone had 21 ties and eight lead changes. The dramatic final set saw Loyola turn away Lewis match points at 24-23, 25-24 and 26-25 before Loyola picked up their only set point opportunity at 27-26. Senior Greg Petty tied it at 27 on a kill. Then Fitterer went back to serve. His first ace put Lewis up 28-27 then his second gave the Flyers the match. Both aces were strikes off the hand of Fitterer to the middle of the Loyola defense.

Lewis struggled out of the gates, falling behind in set one 5-1. Three straight kills by senior Greg Petty gave the Flyers their first lead at 8-7. It was a 21-20 Loyola lead when the Flyers scored the next four points to take the set. Three points came on attack errors, one on a service error and one on a Petty kill. Set two had a similar feel to set one with both teams playing tight until the 20's when Loyola closed the frame on a 5-2 run.

It was an 8-1 run by the Flyers in set three that ended up being the difference. It turned a 10-7 Loyola advantage into a 15-11 Lewis lead. It also burned both of Loyola's timeouts. Kills by senior Geoff Powell for points 24 and 25 put Lewis up 2-1. It all led up to the dramatic fourth set.

Petty had a match-high 21 kills on a .318 attack percentage. Powell finished with 15 kills. Junior Scott Fifer dished out 45 assists and recorded a match-high 11 digs. Fitterer added seven digs and five kills to go with his six aces. "I think the guys rallied around each other at different times," Friend said. "If you look at the stat line I thought different guys stepped it up at different times. That is what needs to happen in these type of matches."

Lewis returns to the court on Friday at MIVA foe Ohio State. First serve in Columbus is set for 7 p.m. ET.