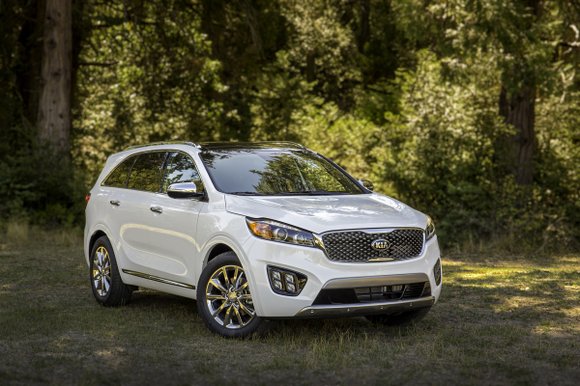 Although it should be sunny by the time you read this, we ran into real world conditions while here to test drive the new 2016 Kia Sorento. Wind gusts were up to 50 mph and sometimes more, precipitation varied between rain and sleet and a bunch of snow was expected that night.

We felt some relief when we were told that Kia had brought all-wheel-drive versions of the 2016 Sorento utility vehicle, front-wheel-drive versions are available. Although we were at altitudes that ranged from 5,000 to 7,000 feet, the roads were not narrow two lane affairs. Still, driving at those altitudes with not much room for error kept us more alert than usual.

Kia has completely revamped the Sorento. The utility had a longer wheelbase by three-inches; it was slightly wider and a bit lower. Overall, it looked sleeker, the hood looked longer and it looked a lot lower than the one half-inch that Kia said it was.

The front end was more aggressive and narrower, while the tiger grille seemed taller. Its quad diode fog lamps were very distinctive and they are becoming the face of the brand, never mind the grille.

Kia brought the V6 and the four-cylinder turbo. We sampled the turbo first. It ran smooth, the engine was quiet and the six-speed transmission was sure. The torque was the secret at these altitudes.

The turbo made 260 pound-feet of torque at 1,450 rpm while the V6 that we sampled after lunch made 252 pound-feet of torque at 5,300 rpm. It made a difference. The Sorento’s six cylinder engine, though it made 30 horsepower more than the four-cylinder turbo, worked harder to get up and over the mountains here and the transmission downshifted often searching for gear induced torque.

The turbo on the other hand was a more effortless drive. By adding the four-cylinder equipped with a blower to the lineup, Kia has given the Sorento a model choice for just about any terrain in the U.S.

With the base four-cylinder engine, the Sorento can tow 2,000 lbs., the turbo can pull 3,500 lbs. and the V6 can pull 5,000 lbs. The towing figures are for all-wheel-drive version of the utility vehicle.

The ride attributes of both Sorentos here were identical as well they should have been. The suspension had been revised, steering was relatively quick, for a utility vehicle the Sorento was fairly nimble, and a new “H” shaped subframe gave it a solid ride.

Overall, the Sorento was quiet, really quiet. That was surprising since the vehicle sat a bit higher than the average car. We felt the wind gusts more than we heard them. The Sorento was so quiet we kept eyes on the tree limbs and branches to gauge how hard the wind was blowing.