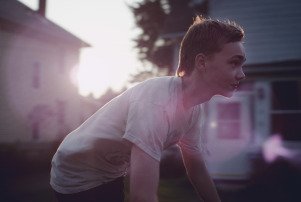 forum. It was one of two films to receive the top audience award at the 2015 Tribeca

Jack is growing up in a small town at the awkward age of 15. With an absentee

father and a harried mother, Jack left to fend for himself in an increasingly

overwhelming world. The fact that he is almost daily haunted and taunted by the

town bully doesn't make live any easier for him. Adding insult to injury, he not

only has to endure the prolonged avenue of mandatory summer school, but he is also

rendered missing in action due to mental illness. With bullies breathing down his

back and an increasingly diminishing supply of self esteem, Jack is on the brink of

Just as he creates a circumstance that threatens to push him over the precipice, he

finds salvation in the most unexpected place. The turn of events and a surprisingly

intuitive act on the part of his peers, demonstrates how the milk of human kindness

as the hardscrabble teen in a compelling performance.

journey after being diagnosed with ALS (Lou Gehrig's disease) in 2005. The result is

a highly personal, feature length documentary on how a physical death sentence can

be transformed into personal triumph of wit and will. More than a decade in the

making, this documentary is a testament to the ability of the human spirit to

triumph over the most dire odds.

.Each winner will get $25,000 in cash and was also screened on the closing day of

Also screening that day were the audience award runners-up: “Sleeping With Other

People,” a romantic comedy directed by Leslye Headland, and the documentary “Song of