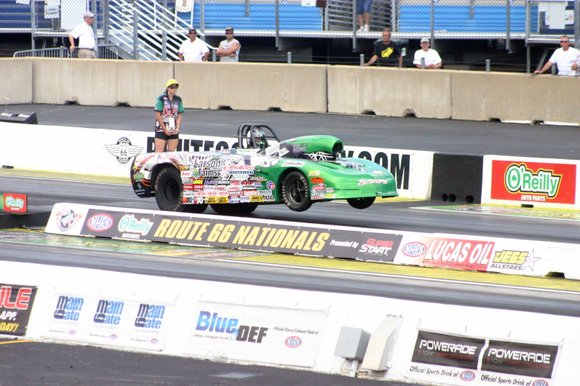 The Four Seasons Heating, Air Conditioning Burndown and Plumbing at Sundown! returns to Route 66 Raceway for the fifth annual running on Saturday, June 6. For the first time ever, the event will play host to the NHRA Harley-Davidson Drag Racing Series, which will run alongside the Lucas Oil Drag Racing Series.

The NHRA Harley-Davidson Drag Racing Series will feature its Top Fuel Class, as 6-second, nitro burning, two-wheel monsters blaze down Route 66 Raceway’s drag strip at 220 mph. Harley riders will have a special motorcycle corral to park in, and can also attend an on-site “Bike Blessing” to start summer off safely.

The Four Seasons Heating, Air Conditioning and Plumbing Burndown at Sundown! will once again feature over 500 cars in addition to fire-breathing jet dragsters approaching speeds 300 miles per hour while roaring down the strip.

Saturday’s show times are at 5 p.m. and 9 p.m., although racing will take place throughout the entire day. Tickets for the Four Seasons Heating, Air Conditioning and Plumbing Burndown at Sundown! are only $20, while kids 12 and younger are admitted for $5.