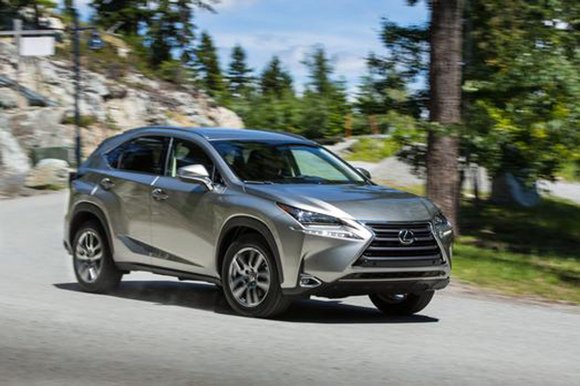 DETROIT – In the Lexus alphanumeric lexicon any vehicle nameplate ending with a small “h” is a hybrid. Such was the case with the 2015 Lexus NX 300h.

It looked like a rocket. The NX is Lexus’ small 5 door crossover and it had very aggressive styling. Beginning with the brand’s spindle grille, the exterior was comprised of sharply angled edges and creases.

The NX had a raked windshield as well as a raked tailgate. It had Lexus’ signature L shaped DRL signature lighting in the front, ground spoilers on the side and a tailgate design in the rear that echoed the spindle grille in the front.

Overall, the 2015 Lexus NX looked like it was slicing through air while standing still and we’re sure that is exactly the look Lexus designers were trying to achieve.

Under the hood was a 2.5 liter four cylinder engine and two electric motors that made a combined 194 horsepower and 152 foot-pounds of torque. The engine was mated to a continuously variable transmission (CVT).

The Lexus NX 300h is not going to blow anybody away off the starting line. But our test vehicle was capable. It wasn’t overwhelmed on the expressways here. And though it was a small crossover, it was not outsized by other vehicles or traffic either.

Our test vehicle had an all-wheel-drive system that was designed for the NX hybrid. It used an electric motor to drive the rear wheels, the front axle was powered by the gasoline engine or second electric motor or a combination of both.

This system operated in front-wheel-drive mode and only sent power to the rear wheels when needed on slippery surfaces. The rear electric motor also acted as a generator when the NX was in regenerative braking mode, increasing the amount of kinetic energy recovered.

Since it was dry here doing our test drive we did not get the chance to experience the system at work.

The interior of the NX was special. It was meant to evoke a feel of a sports car and did so pretty well. It was dominated by a center console. Above it a fixed information-navigation screen was indented into the dash creating a shelf. The vents, analogue clock and climate controls were embedded on a pier like ledge that gently sloped down from the dash. The audio controls were beneath.

Cup holders and the drive mode selector were in the center console. It was a different but clean layout. We thought the way Lexus handled the TFT instrument panel was thoughtful too. Two rings, one for the speedometer and the other for the tachometer where there. The analogue numbers digitally projected looked permanent. But turn the NX off and they disappeared except the rings.

The back seats were spacious; there was plenty of head room and two people could be very comfortable. The floor was almost flat, thus, if a third person had to sit in the back seat it would not be that bad – for a short trip.

The passenger cabin was swathed in black and cream leather with linear black shadow wood trim. Our test vehicle had the luxury option package. It was comprised of heated and cooled front seats, a heated steering wheel, 18-inch alloy wheels, a navigation system, a premium sound system and rearview camera.

It had automatic dimming sideview mirrors that tilted when the NX was put in reverse, blind side alert, parking assist, a pre-collision warning system and adaptive cruise control. In other words, our test vehicle was chock full of creature comforts.

Using a compatible smartphone, Lexus said the voice-enabled apps on the Entune system let you search the Internet through Bing™, make restaurant reservations using OpenTable®, get movie tickets via MovieTickets.com™, listen to Internet radio, (including Pandora®, iHeartRadio™ and Slacker), search business reviews on Yelp® and check in on Facebook Places™.