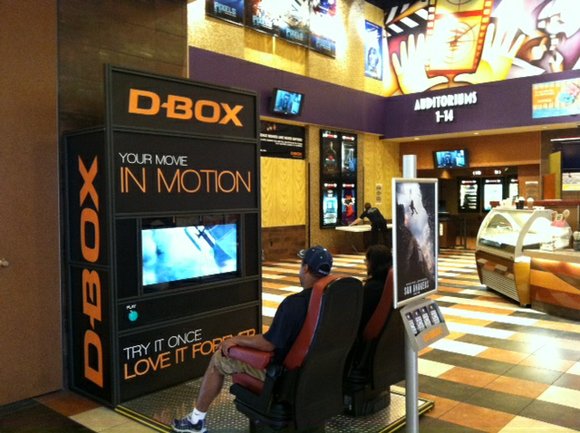 A patron at Cinemark Louis Joliet Mall tries out a new D-Box seat, which provides the sensation that you’re moving along with the image on the movie screen. Brock A. Stein

When Joliet's Cinemark Movies 10 met its demise earlier this year, done in by a wrecking ball clearing the path for new stores, it marked the end of an era.

But don't write it of as the end of an industry, experts say.

While many of the $2 movie houses showing second-run films are being relegated to the past, killed off by cheaper options that let viewers watch what they want when they want from the comfort of home, the movie theater business is changing with the times.

“You’re sitting in front of a big screen with the sound and the lights," said Kate Knuth, general manager of the Louis Joliet Mall, home to Cinemark Louis Joliet Mall movie theater. "I think there will always be something about that experience."

The end of the movie theater business has been predicted for 65 years or more, when people who once went to the movies on a weekly basis started staying home to be entertained by the black-and-white pictures they could get on their television set.

The industry has survived the advent of color television; the introduction of VHS tapes that spawned video stores on every corner and the giant Blockbuster chain; the switch to DVDs, which could be purchased for the price of a couple of movie tickets; and kiosks such as Redbox, which dispense movies for a buck at any time of the day or night.

At its peak in 2004, Blockbuster boasted a network of over 9,000 stores and 60,000 employees. Today, it's a memory that brings a smile and a footnote in business textbooks. Joliet's last independently owned video store, Video Quest, will close in June, and the only remaining chain -- Family Video -- is adding pizza parlors to their stores to keep people coming in.

In fact, many predicted the Great Depression would be the end of the fledgling movie industry, which had just made the transition from silent films to those with sound. Stars like Shirley Temple and the need to escape their problems helped Americans come up with the 27 cents needed to go to the "pictures."

In other words, the death of the movie theater, to paraphrase Mark Twain, has been greatly exaggerated.

“The buck-a-flick movie theaters, I think they’re just gone,” said John Greuling, president of the Will County Center for Economic Development. “The demand for that just isn’t there."

No doubt about it, places like the Movies 10 “ took a huge hit from Netflix and Redbox,” said Jim Haller, Joliet's community and economic development director.

But don't compare that to the first-run movie complexes, Haller said. There may be fewer of them than there had been, but they're still offering something the public wants, he said.