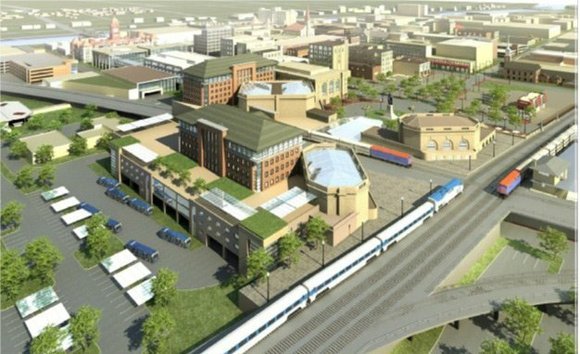 An artist’s rendering of what the Joliet Gateway Transportation Center – which includes a new train station and platforms – will look like when completed.

Joliet may have an unexpected ally in its impasse with the state over the release of money for a new train station – the federal government.

The Illinois Department of Transportation has refused to provide the $2.7 million earmarked for the station and a permanent platform for Amtrak and Metra Rock Island line patrons because the city will not put $5 million into an escrow account to prove it has the funds to build a new bus station and bus turnaround, the final phase of the downtown Joliet Gateway Transportation Center. It’s also refusing to cover cost overruns on the project, despite a verbal agreement to do so by the former IDOT director.

Ironically, an action the state took last year could be the factor that forces the state’s hand, Mayor Bob O’Dekirk told the Joliet City Council Tuesday.

A short-term waiver of Americans with Disabilities Act rules was obtained so that a temporary station and platform could be installed while the construction of the new facility was under way. The waiver expires before the end of the year, and fines could be assessed for every day a new handicapped-accessible facility is not in place, O’Dekirk said.

That may be the motivation state officials need to reverse their position, especially given that the state is already in serious debt and there’s no resolution in sight to the budget battle between the governor and the General Assembly.

O’Dekirk said city officials, joined by state Sen. Pat McGuire and state Rep. Larry Walsh, recently met with IDOT, Pace and Metra officials in an effort to work out a deal and while there was not a lot of movement, they agreed to meet again in two weeks. The state legislators were strong advocates for the city, he said.

“They fought IDOT hard,” he said. “They really were not going to take ‘no’ for an answer.”

O’Dekirk’s comments were spurred by questions raised by City Councilman Jim McFarland, who said he was concerned the city didn’t have a backup plan should the state refuse to budge and that he didn’t want to see Amtrak and Metra passengers spending another winter waiting for trains in the rain, snow and cold.

City Manager Jim Hock said he was encouraged that IDOT officials were willing to discuss the deadlock.

“We’ll know more in a few weeks, and that’s more than what’s happened in the last three months,” Hock said.

The impasse can be attributed to a change in leadership both in the governor’s office and at IDOT. Plans that had been previously agreed to, including the state’s acknowledgment that the Gateway project would go over budget and the state would pick up the difference, are not being honored by the new regime, city officials said.

The cost overrun for just the train station and Rock Island platform is $600,000, and the project overall is now $7 million over budget.

City officials said it makes no sense that the state is sitting on money already approved for the station and platform, when that work could be completed now and funding for the last phase of the work secured later.

The city council also learned Tuesday that repair work needed for Union Station, which was closed to train traffic earlier this year in anticipation of the new station being built, is also at a standstill because of unexpected costs.

The city owns the structure and is responsible for its maintenance. It’s currently leased to a company that uses it for weddings, banquets and other private events.

Not only did bids for a new roof come in more than 200 percent over budget, a state grant to pay for some of the work is on hold as a result of the state budget impasse, Hock said.