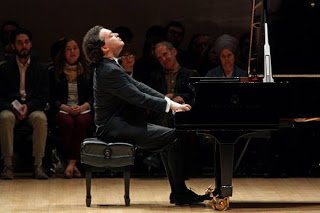 Evgeny Kissin's program of Mozart, Beethoven and Brahms and the Spanish composers Albeniz, Larregla and possible encores of Granados, will be heard at Chicago's Symphony Center Sunday, November 15 at 2pm. For information, visit cso.org.

The most exquisite moments were to follow in the Andante cantabile in which he allowed the central theme to literally sing forth, filling the acoustically perfect space with the most celestial of sounds. The Allegretto literally danced beneath his lithe touch, which ended with a graceful flourish.

Kissin seemed most at home with Beethoven's Piano Sonata No. 23, appropriately named "Apassionata." Kissin found the beating heart of this masterpiece of the Romantic piano repertoire. There was long and artful development of the central thematic line of the Allegro assai, building to a crescendo that burst, then faded like fireworks against a nighttime sky. Andante con moto was more dance-like with spirited movement, just as Beethoven intended. Again, Kissin's strong fingers brought forth the light quick-step of the melody while conveying a sense of the dramatic elements to follow. He pulled out all the stops in the final movement, Allegro ma non troppo (fast, but not too fast), was Kissin's opportunity to showcase the full dynamic force of his playing. At first restrained, building the increasingly complex thematic material in the left hand, while executing beautifully embellished cascading arpeggios in the right. It all erupted in a dazzling display of virtuosic prowess.

Following the interval, Kissin bore his Romantic soul in Johannes Brahms' Three Intermezzos. His contemporaries referred to them as a "fountain of pleasure....filled with "poetry, passion, rapture and heartfelt emotion." Kissing summoned forth all that and more in his performance. He leaned forward, hovering above the keys as if listening patiently for the soul of the music's creator to speak to him. The emotions he conjured forth were thusly heartfelt. There was a bittersweet quality to his playing that almost brought one to tears.

Isaac Albeniz' tone poems Granada, Cadiz, Cordoba and Astorias are the Spanish composer's version of tone poems, evoking the sights and sounds of his homeland. Awash in impressionistic tonal brush-strokes, Kissin used his considerable skills to paint a musical portrait as only he can do.

The ensuing encores of fellow Spanish composer Enrique Granados; Quejas o la maja y el ruisenor, Andaluza and Brahms' familiar Hungarian Dance, No. 1, had them figuratively dancing in the aisles as the happy and satisfied audience made its way toward the exits.