Artist's rendering of the Hope Manor Apartments being built in Joliet. 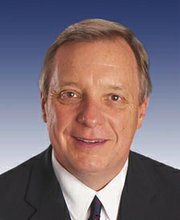 The money has been earmarked for vets seeking help through funding to support veterans seeking assistance through the Edward Hines Jr. VA Medical Center and Hope Manor Apartments.

Hope Manor is a housing complex being built on former Silver Cross Hospital property on the Joliet's far east side, in close proximity to a new VA clinic that was built in part of the former hospital. When complete, it will include 67 units of one, two and three bedrooms as well as social services assistance for residents.

The Joliet money is part of $443,453 in new grants and vouchers earmarked for Illinois veterans through the U.S. Department of Housing and Urban Development and the Department of Veterans Affairs, Durbin said.

“Last night, in Illinois alone, more than 1,200 homeless veterans were on the street," Durbin said in a news release announcing the increased funding.

"This country can do better—and must do better—for the brave men and women who have sacrificed for our nation honorably. We should continue to honor and recognize their service not just on Veterans Day, but every day, by upholding the promises we have made to them. This funding is a reflection of that promise we made to the men and women who serve this country to provide them with the housing and the health services assistance they earned during their service,” Durbin said."

Nearly $250,000 was also awarded to the Housing Authority of Cook County in Chicago, which will help veterans seeking assistance through the Edward Hines Jr. VA Medical Center and the Freedom’s Path.

The HUD-VASH funding provides rental assistance under a supportive housing program for homeless veterans. Funds are awarded to public housing agencies that have agreed to partner with eligible VA medical facilities.