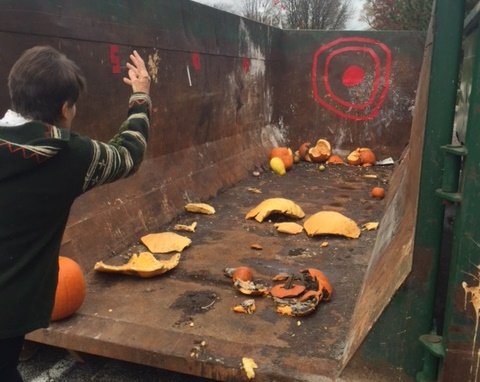 A participant lets his jack-o-lantern fly during the second annual Pumpkin Pitch at Lewis University in Romeoville. Courtesy of the Will County Land Use Department

Will County provided this news release:

The Will County Land Use Department’s second annual Pumpkin Pitch gave participants an opportunity to get rid of pumpkins and leave with information.

The Pumpkin Pitch was held at Lewis University in Romeoville Nov. 6 and 7. It was sponsored by the Land Use Department’s Resource Recovery and Energy division, Lewis University, Will County Farm Bureau and the local University of Illinois Extension Office.

In 2012, food scraps and landscape materials were identified by the U.S. Environmental Protection Agency as the largest waste stream entering the nation’s landfills, said Marta Keane, RRE Recycling Program Specialist. The agency asked that more attention be given to composting and reducing food waste.

“The point of the event was to raise awareness in those areas,” Keane said. “We believe it did exactly that.

“This event is unusual as we are collecting something that many ‘green’ folks are comfortable placing in their garden or putting in the yard for the squirrels. But many of the 68 participants reported being unable to do this at their homes. Others told us they came out to support the educational effort.”

Also, she said some people reported they use their pumpkins and gourds as Thanksgiving decorations and would like somewhere to drop them off after the November holiday; that concept will be explored for another year.

Master Gardener Nancy Kuhajda, who distributed handouts and answered gardening questions, said the Extension Office has been getting calls from people asking about composting. People are clicking on the composting information page on www.willcountygreen, as well, Keane reported.

For additional information about the Will County Land Use-RRE, go to www.willcountygreen.com.