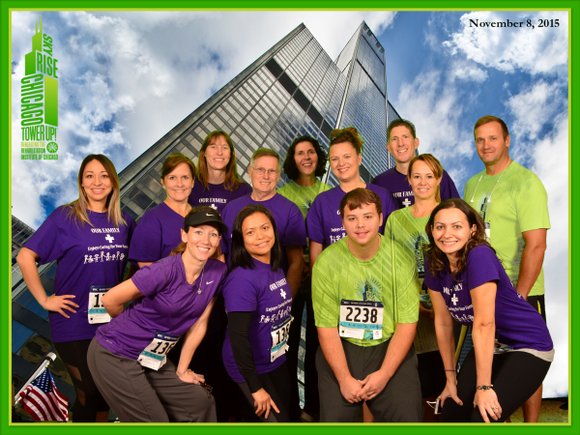 When 69-year-old Keith Reed suffered a stroke a couple years ago, he never imagined that someday he’d be climbing 103 floors of the Willis Tower at the Seventh Annual SkyRise Chicago Challenge.

As a result of his stroke, the right side of Reed’s body was paralyzed, affecting his speech and body movements. However, after undergoing three months of physical, occupational and speech therapies at The Rehabilitation Institute of Chicago (RIC) at Silver Cross Hospital in New Lenox, Reed was able to function normally.

Now he is doing so well that he didn’t hesitate to say yes when his therapist called to ask him to be a part of the RIC at Silver Cross team at the Nov. 8 event.

“I am able to walk and sing in my choir because of the wonderful care I received from my therapists at The Rehabilitation Institute of Chicago at Silver Cross Hospital,” the Lockport resident said. “I was just so happy to be healthy to participate in such a worthwhile event with the team of people that helped me recover so well from my stroke.”

As an ex-distance runner, Reed knew he had to train prior to the event. He built-up his stamina through exercise and joined fourteen team members from RIC at Silver Cross to climb all 103 floors (2,109 steps) in the Willis Tower.

The RIC at Silver Cross group raised $2,076 which was added to the overall total of more than $1 million that was raised for RIC’s clinical and research programs. SkyRise Chicago – the world's tallest indoor stair-climbing event, benefits The Rehabilitation Institute of Chicago (RIC). All proceeds of the sold-out event will help provide quality clinical care and cutting-edge research for more than 50,000 RIC patients from around the world.

Dr Joanne C. Smith, MD, RIC President and CEO, aptly summed up the essence of the event, “Every day at RIC, I am inspired by the remarkable strides our patients make, the dedicated work our clinical care teams deliver and the innovative research from our scientists and engineers. SkyRise Chicago gives our community the opportunity to applaud these achievements, and cheer on our patients to new victories.”

The Seventh Annual SkyRise Chicago drew more than 3,000 participants. Participants crossed the finish line at SkyDeck Chicago, which features The Ledge – a glass balcony that extends more than 4 feet outside the building where visitors can observe panoramic views of up to four states.