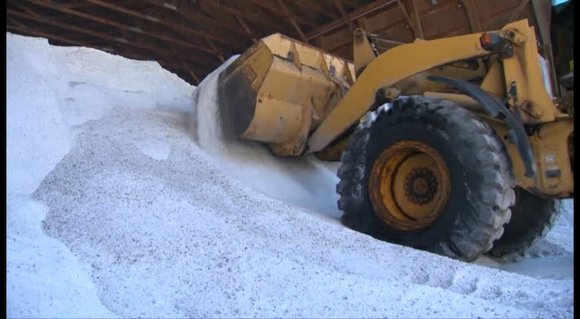 The village of Shorewood is seeking to purchase salt to replenish its supply, which was diminished after repeated snowstorms this past winter.

During the heaviest winter he can recall, Plainfield Public Works Director Allen Persons said the village used about 5,000 tons of salt to keep roads clear and driveable.

Depending on who you believe, they may need as much supply as they can get. The Farmer’s Almanac is predicting another frigid winter with heavy snow. However, meteorologists at NOAA cite a strong El Nino that could bring milder temperatures and less snow fall than in 2014.

So, in preparation for whatever winter has in store, Persons and many of his public works cohorts around the suburbs are breathing a sigh of relief as salt prices have come down from the previous year’s highs.

Last year, Plainfield and many surrounding suburbs were left scrambling for salt when a state bid program failed to secure bids for their supplies.

Persons said the village participated in the state bid program for about 25 years before last year’s problems.

“We had to scramble and we had to find salt and it was expensive,” Persons said. The village paid about $107 per ton for 3,000 tons in late August last year, about $50 more per ton than their typical costs.

The village looked at partnering with the city of Naperville for some of their supply this year but when bids were less than favorable decided to give the state bid program another try.

That’s resulted in a dramatic drop in costs from last year with the village securing 4800 tons for $62.61 per ton this year. The purchase will put the total salt on hand at about 5800 tons.

Prices have trended lower in other Will County towns as well, with the city of Joliet also seeing a small decrease in their salt costs.

Unlike Plainfield, the city was able to extend its contract with its supplier for salt last year, Public Works Director Jim Trizna said.

“We were fortunate,” said Trizna.

Despite the extension, Trizna said the city was limited in the amount it could purchase and still went out to secure more from a separate vendor.

In total, Joliet paid about $58.81 per ton for salt between the two sources, with about 6,000 tons coming through a partnership agreement with Naperville.

This year, Trizna said, the city will purchase all of its salt supply through the state program for a slight savings of $57.40 per ton.

With about 507 miles of roadway to keep clear in the winter, he said the city uses about 12,000 tons of salt in a typical winter and has used up to 16,000 tons if weather is particularly nasty.

Over in Shorewood, Public Works Supervisor Chris Drey is ordering 1,800 tons of salt to shore up their stockpile for the winter. The village, he said, also re-partnered with the state bid program this year and has seen significant savings.

This year the village will pay $60.14 per ton for its supply, compared to its two separate purchases last year for $92 and $107 per ton.

The forecast models Drey has consulted are predicting a milder winter, he said, which could mean the village could hold on to some of that salt for later.

“There are good years and bad years,” he said. “This year is supposed to be a little bit milder.”