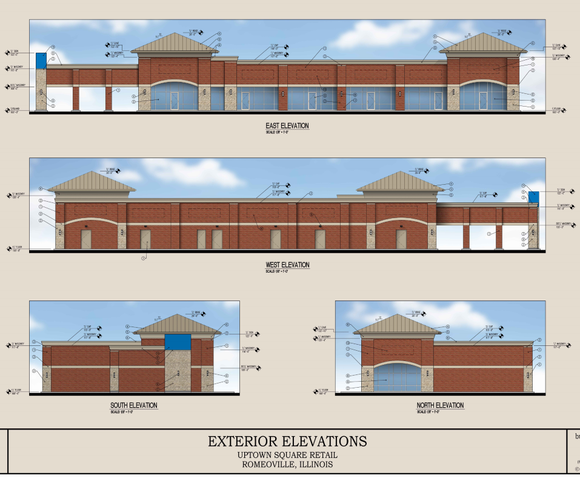 Romeoville will add another development to its Uptown Square site after approving a special use permit for a multi-tenant building on Monday.

Romeoville officials have approved another piece of their redevelopment plan for the Uptown Square retail site.

Trustees voted Monday to approve a special use permit for the PAL Group, which plans to construct a 9,400-square-foot, multi-unit retail building on outlot 2 of the former Spartan Square Plaza.

The lot sits at the northwest corner of Alexander Circle and Route 53 and continues the village’s continuing push to reinvigorate the east side corridor or Romeoville.

The new site will be capable of accommodating up to six tenants and will include three drive-through lanes for a bank tenant.

Representatives for the developer told the village board that they were in final negotiations with BMO Harris Bank and have had discussions with Subway for another storefront. The developer plans to begin construction on the site this fall.

Improvements for the site will include cross-access with the village’s sports and events center as well as a future grocery store and Fat Ricky’s restaurant, which were approved during the summer.

“This is another very important piece to the redevelopment of the area,” said Mayor John Noak who cited the versatility of the multi-tenant building that will “allow for flexibility for different users.”

In other business, Romeoville, like many neighboring communities, will see big savings on their road salt purchases this year.

Public Works Director Eric Bjork asked the board to approve a state bid price of $55.60 per ton, a 50 percent savings over last year’s record-high prices.

Bjork said the savings come at an opportune time as the state budget impasse has resulted in a halt to Motor Fuel Tax (MFT) payments being made to to the village. MFT funds come from a tax on every gallon of gas sold in the village and the money is used for road improvement projects as well as salt purchases, he said.

“It’s important because of the status of MFT allotments that we are not getting from the state,” said Bjork.

The village also voted to move ahead with phase 1 design work for a new park, yet another project that has been stalled by the budget impasse.

Trustees agreed to spend up to $125,000 for design work on Discovery Park, which will be located near Airport Road, west of Weber Road.

The state granted a $400,000 OSLAD (Open Space Land Acquisition and Development) grant in January, before the program was put on hold, Parks and Recreation Director Kelly Rajzer said.

Amenities at the new park will eventually include a soccer field, new parking lot, sand volleyball courts, bag toss game areas and three half basketball courts as well as an extension of High Point Drive.

Because the state money came in the form of a matching grant, Trustee Sue Micklevitz said it made sense to spend some of the village’s expected portion for the project in preparation for when the state money becomes available.

Doing the initial work now would put the village “ahead of the game if the state releases the funds,” Rajzer said.

The state has delayed OSLAD funding before but has always eventually released it, Micklevitz said.

“The money’s there, it should be released,” she said.