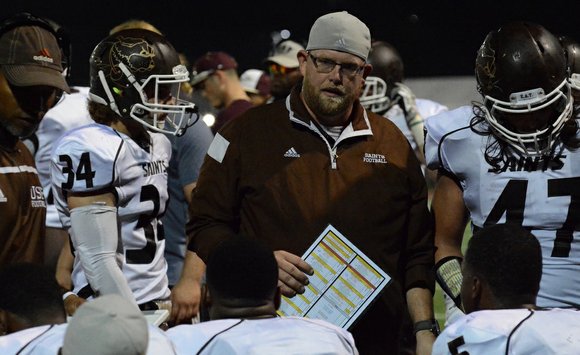 In a matchup of nationally-ranked Mid-States Football Association Midwest League rivals, No. 22 University of St. Francis forced six turnovers en route to a 25-10 win over No. 23 St. Ambrose University Saturday at Brady Street Stadium. With its fifth consecutive victory, USF improved to 5-1 overall and 2-1 in MSFA Midwest League play.

St. Ambrose (4-1, 1-1) suffered its first defeat of the year. The Saints, who concluded a three-game road stint, remained undefeated in four games away from home.

USF's defense, which entered the game with the second-most takeaways in the NAIA, took the ball away from St. Ambrose six times with five interceptions and a fumble recovery. The Bees had turned the ball over on only six occasions in their four previous affairs.

After St. Ambrose opened the scoring with a 42-yard Matt Cotiguala field goal in the final minute of the first quarter, sophomore Eli Spann (Valrico, Fla./ Tampa Bay Tech) returned the ensuing kickoff 93 yards for a touchdown. Spann's kickoff runback was the longest in USF history, surpassing the previous record of 88 established by Elliot Allen twice in 2010.

St. Ambrose answered on its next play from scrimmage when Patrick Smith connected with Isaiah Mosher on a 70-yard touchdown pass. Six plays into its next possession, USF found the end zone on a 53-yard scoring strike from sophomore quarterback Don Butkus (Dyer, Ind./ Mount Carmel) to junior wideout Dantrell Wright (Plainfield, Ill./ Plainfield South). The Saints failed the two-point conversion attempt for the second time in the contest, making the score 12-10 in favor of USF with 12:39 to go in the first half.

USF scored again late in the second quarter when Butkus and senior running back John Magee (Plainfield, Ill./ Plainfield South) hooked up on a 5-yard touchdown pass to cap a 10-play, 67-yard drive at the 3:46 mark of the second quarter. In addition to his TD catch, Magee rushed for 116 yards on 27 carries.

The Saints scored the only points of the second half on a 66-yard option pass from Wright to senior wideout Sheldon Magee (Plainfield, Ill./ Plainfield South) midway through the third quarter. Sheldon Magee finished the game with 119 yards on four catches.

USF's five-game winning streak is its longest in four years under head coach Joe Curry and its longest since the Saints won six in a row in 2011. The Saints kick off a three-game homestand next Saturday at 1 p.m., when they host NCAA Division II Truman State University at ATI Field at Joliet Memorial Stadium.