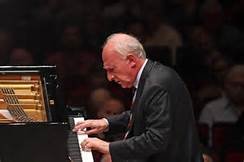 NEW YORK---Those who packed Carnegie Hall to see Italian pianist Maurizio Pollini, in a long-anticipated appearance, were not disappointed. They were treated to the spectacle of a master craftsman at work. The few barely noticeable flubs in execution were overshadowed by the deep emotional connection and intelligent interpretation in the nearly all-Chopin program.

Pollini settled into the afternoon with Robert Schumann's Allegro in B minor, followed by an impassioned reading of his Fantasy in C. His ability to allow the contrasting themes in the former to ring with clarity, showed his superior pianism.

Polonaise Fantaisie in A flat major gave a clear indication of what was to come. Majestic chords were followed with inventive themes that darted here and there with curious exploration. Pollini made this time-honored work seem fresh and alive.

It was on to the business at hand in the second half of the program. The audience had come to hear his masterful interpretations of Chopin and Pollini did not disappoint. He aptly portrayed the swaying motion and dreamy Italian romanticism of the Venetian gondolier songs which are at the heart of the work.

His skill at interpretation and technique were most evident in the ensuing Nocturnes in F minor and E flat, in which he contrasted lyrical themes with restless invention. The concluding Scherzo No. 3 was bright and lyrical throughout.

The enthusiastic applause Pollini received brought three encores that brought a satisfying conclusion to the performance; the Etude "Revolutionary," Ballade No. 1 and the Nocturne in D flat, all played with uncanny skill and aplomb. Pollini returns to Carnegie Hall Tuesday, October 25 with a program of Beethoven and Schoenberg. It is not to be missed. For information, visit carnegiehall.org.