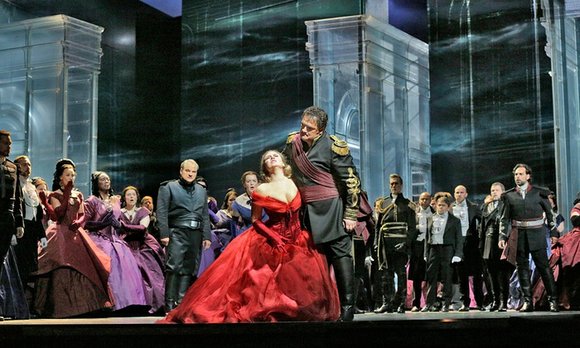 Having seen the production both live at the Met and in the movie theatre, it became apparent how readily Shakespeare's drama lends itself to the medium of Live Cinema. Set to operatic libretto and orchestration by Guiseppe Verdi, with a set designed by Es Devlin, Costumes by Catherine Zuber, and production design by Luke Halls, the production seemed to sparkle with renewed vitality when viewed through the dozen or so lenses of Halvorson's cameras and his team of directors. They employed camera angles from every corner of the opera house, from the raptors, to behind stage and used cameras on runners, like those used to follow runners during the Olympics, which Halvorson revealed in an interview in a film segment shown during the intermission about his behind-the-scenes camera work.

Met baritone Eric Owens was the superb backstage host and interviewer. His pre-broadcast comments set up the ensuing action with insightful commentary and he had a brilliant command of the Russian, Serbian and Italian languages in introducing the singers and their characters in the production. His questions during the backstage interviews were well thought out and allowed the singers to elucidate their personal thoughts on the elements of the production. Its notable that the capacity movie-theatre audience listened with rapt attention to all of the backstage commentary and stayed on to watch the behind-the-scenes video on Gary Halverson and his crew's elaborate preparations and execution of Met Live HD productions.

The use of Halvorson's cameras heightened the drama, especially in the early scenes when the singers are paired off in simultaneous exchanges where key points are made concerning the plot in parenthetic vocal statements. The camera was able to zero in on each of the paired singers, so that you could keep up with the action and the unfolding of Iago's devious plot. A sweeping slow pan of the chorus, meanwhile, made what was otherwise a very static stage setting on the Met stage, appear more mobile and visual join the cinematic setting.

Aleksandrs Antonenko, with his stentorian voice and robust demeanor, could not have made for a more commanding Otello. His voice literally rang forth above all the others in the ensembles and his acting capabilities seemed light years above the somewhat wooden performance he gave on Opening Night. The fact that he was not in darkened makeup was of little concern, as one got deeper into the layers of the character as it unfolded in his superb portrayal. To tell you the truth, the time I saw Placido Domingo play the role some years ago, I found the getup distracting. Antonenko's appearance, in fact, is not too unlike that of many Moors I observed during my trip to Morocco a few years ago. If he were to walk down a street in Marrakech, he'd blend right in!