“The Face That Changed It All” Interview with Kam Williams 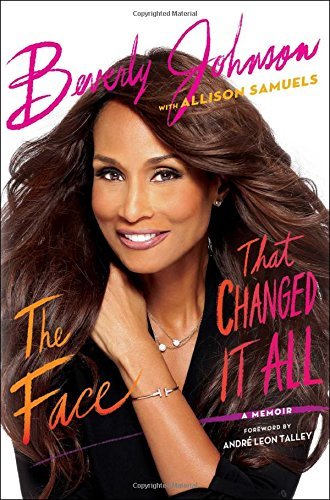 For a photo of Beverly at 18 with her mother, see attachment

From Career to Cosby, Beverly Bares It All!

Beverly Johnson rose to fame in August of 1974 when she made history as the first African-American to grace on the cover of Vogue magazine. The multi-talented supermodel/actress/businesswoman/author has enjoyed an enduring career which has included writing a several books and starring in her own reality-TV series, "Beverly's Full House."

Recently, she has bravely stepped forward as the highest-profile victim to accuse Bill Cosby of drugging and assaulting her. Here, she talks about that incident as well as her new autobiography, “The Face That Changed It All.”

Kam Williams: Hi Beverly, thanks for another interview.

Beverly Johnson: Hi, Kam. Thanks for reviewing the book and for including a picture of me and my mother. I appreciate that. I really do. You know show she has Alzheimer's. [Wipes away tears]

KW: No, I didn't. I'm sorry to hear that. What interested you in writing your autobiography?

BJ: I'm not the type of girl who cries a lot, but I'm crying right now because I don't know whether I'd written it, if my mother hadn't developed Alzheimer's. There are many things in the book that I know would've caused her a lot of pain, and I wouldn't want to do that to her. When you think about trying to reduce a life of 60 years to 250 pages, it's a little overwhelming.

KW: How did you go about deciding what to include?

BJ: Basically, what I did was break it up into childhood, Seventies and Eighties. I kinda bit off half of it. It was also important to me as an African-American to write this because we've had a very painful history, and haven't passed our stories down, perhaps out of shame. I know that in growing I would grab onto any little anecdote my mother or grandmother might leak out by accident. I believe that we should tell our stories, because they're important for the future generations. So, I want to make sure I leave my story, even though it isn't all pleasant. I don't want anyone to pass away with their song still inside them. That's really why I decided to write my memoirs.

KW: Marcia Evans says: I love sistah Beverly Johnson! I am wondering if you have been blessed with another grandchild by your daughter, Anansa?

BJ: Yes, I have three grandchildren: 4 year-old Ava; 2 year-old David, and a 1 year-old. And I have the son I always wanted in my son-in-law, David Patterson. They're the most remarkable parents I've ever known. I always tell my daughter that she's such a better mother than I was. It's incredible how involved they are with their kids on a day-in, day-out basis.

KW: She says: I still frequently refer to your amazing first book "True Beauty" about the natural health regimen you lived by. I would love to see you do another reality series but with a different format than the one you had on the Oprah Winfrey Network. Perhaps you could do a beauty talk show enlightening younger folks about class and beauty.

BJ: Gee, that's very kind of you, Marcia, although "True Beauty" was actually my second book. My first was "Beverly Johnson's Guide to a Life of Health and Beauty." Each of them was a labor of love. They were both ahead of their time, and it's so great to hear that people still turn to them as references. I don't know about a talk show, but we are working on some other TV ideas.

KW: Larry Greenberg asks: How much harder is it to achieve the American Dream now than it was when you ascended to stardom?

BJ: What a great question! I was 18 years-old back then. In the Seventies, there were many more black models than there are today, and there were a slew of successful black designers, makeup artists and hairdressers. There were even black modeling agencies which, by the way, turned me down. Nevertheless, there were so many more opportunities for African-Americans in this realm, the fashion world, back then than there are now. I don't know if that's because we have a closed society in the fashion bubble, while the rest of the world has laws mandating diversity and inclusion that are making a difference in Fortune 500 companies.

KW: Teresa Emerson says: Hi Beverly, I'm anxious to read your autobiography! Were you aware of, or had you heard about, Cosby's reputation at all before all this happened? If so, had you just dismissed it as rumors, never thinking he would do anything to you.

BJ: No, honey, I'm a very smart girl. If somebody warns me, "Don't go around that corner because there's a giant sinkhole you could fall into," then I'm going to go in the other direction." That's just how I m by nature. I'd be like, "Thanks for pulling my coattail." That is what is so astounding, the secrecy that was maintained not only by the people in his circle but by the press and the police. It speaks volumes about the silence in society when it comes to violence against women in general. I don't see it as just a Cosby issue, but as a societal one that he has become the lightning rod for.

KW: Marilyn Marshall asks: Have you forgiven Bill Cosby for what he did? Why or why not?

KW: Felicia Haney asks: Did you worry whether going public about the Cosby episode might overshadow your many accomplishments, meaning, leave you remembered for that instead of as the first black face to grace Vogue magazine?

BJ: I'll tell you this much. Whenever I discuss my legacy with my daughter, I always say, "I just want one school named after me. One school. I never wanted part of it to be that I was once drugged by Bill Cosby. I don't think anybody would want that. For me, going public all came down to my conscience and my principles. I had to go where they led me.

KW: David Roth notes that you were initially drawn to a career in law due to the huge impact the Civil Rights movement had on your life. But you instead made your mark as the first black cover model of American Vogue in 1974. Law and modeling strike me as aspirations with very little in common. One is rooted in the tangible, socially revolutionary drive for equal justice for all, and the other in a personally rewarding accomplishment based on a narrow, subjective judgment, namely, who does the fashion world consider beautiful enough for their magazine covers and catwalks, a standard that is impossible to extrapolate to the larger population of minority women. So, what turned you from the grand aspiration of broad-based cultural change to the narrower aspiration of breaking down a racial barrier in a particular industry?

BJ: That's another great question. The answer is money. My father was making $75 a week as a steel laborer. I was floored to learn that a model made $75 an hour for standing there with her hand on her hips. For me, it was a no-brainer, since it afforded me an opportunity to help my family. I had always envisioned finishing school. But I ended up the only one in my family who didn't finish college. Fate just has a way of intervening and showing you a viable alternative. And as far as being that person who appeared on that Vogue cover at that particular moment, I had nothing to do with it. When I'm reflecting and really connected to my higher power, I think it would have been a crime to turn my nose up at something that I really felt was a gift. I believe God gives each of us certain gifts, and you should take advantage of those gifts.

KW: Children's book author Irene Smalls asks: Out of your many achievements, which are you most proud of?

BJ: Well, of course, motherhood. That was a defining moment in my life. You can't get any closer to God than by giving birth to another human being. After that, the Vogue cover in 1974 because of what that meant to so many people around the world. That made me who I am today.

KW: Irene also says: You did not let the Bill Cosby incident cripple you? How did you heal from it?

BJ: I've always done a lot of work on myself whether in the way of therapy, a 12-Step program or self-help books. We have so many options to better ourselves and our mental health. I'm the type of person who wants to take advantage of those services, and I think I did. I also healed with the help of my spiritual connection to a higher power.

KW: Irene's last question is: What are your thoughts on the Black Lives Matter movement?

BJ: I'm all for it. I feel that it's very important because it's a conversation that's taken 400 years to come to the forefront. So, we can't ignore the powerful message that black lives do matter.

KW: AALBC.com founder Troy Johnson asks: What was the last book you read?

BJ: I just read "Model Woman," Eileen Ford's biography. She was an agent of mine.

and "The Self-Made Billionaire Effect" which was a powerful read.

I like to read a lot, about four books at a time. Usually, it's a biography, a history book, a self-help book, and something a friend suggests.

KW: Troy also asks: Where are your “Johnson” people from? Mine are from Arkansas originally.

BJ: That's an interesting question. My father and grandfather came from the north, from Canada.

KW: Was there a meaningful spiritual component to your childhood?

BJ: Yes, very much so. My mother dressed us up to go to Sunday school, although my father was a little skeptical and would make us think. He'd say things like, "Now, don't put all your money in the collection box."

KW: The Viola Davis question: What’s the biggest difference between who you are at home as opposed to the person we see on the red carpet?

KW: What was your very first job?

BJ: I worked at the YMCA has a swim instructor.

KW: Who loved you unconditionally during your formative years?

BJ: I My whole family. My parents and my siblings.

KW: The Sanaa Lathan question: What excites you?

KW: The “Realtor to the Stars” Jimmy Bayan’s question: What’s your dream locale in Los Angeles to live?

BJ: I'm already living in my dream location in the desert.

KW: The Anthony Mackie question: Is there anything that you promised yourself you’d do if you became famous, that you still haven’t done yet?

BJ: Yes, found a scholarship to help kids go to college. My whole thing is education.

KW: Lastly, what’s in your wallet?

KW: Thanks again for the time, Beverly, and best of luck with the book.

BJ: Thanks so much, Kam.