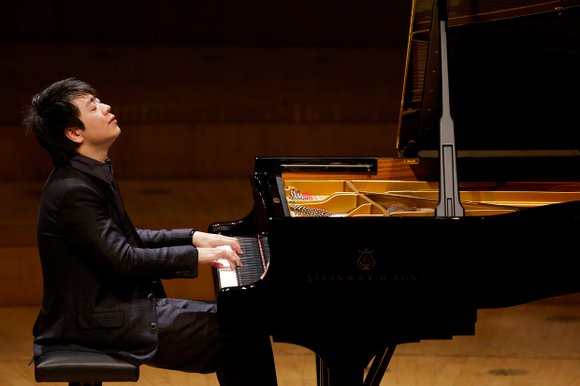 NEW YORK--Piano megastar Lang Lang is known for his glitz at the piano, sometimes with acrobatics bordering on an Elton John or Jerry Lee Lewis. He's been billed as charismatic and exuberant. At times, it can seem annoying.

Happily, none of those histrionics were evident in his recent masterful performance on the Perlman Stage of Carnegie Hall. Lang Lang chose a more contemplative approach in which he revealed the emotive side of Pyotr Ilyich Tchaikovsky in his almost Impressionistic The Seasons, Opus 37b, Tchaikovsky being another artist best known for his more dramatic and sometimes over-the-top compositions.

Tchaikovsky's The Seasons is a set of suites in which the months are noted with situational settings. January, for example, is "By The Fireside, June, "Barcarolle" (referring to the lovely songs sung by the gondoliers in Venice), August is "Harvest." Lang Lang painted a musical portrait of each, using varied pressures of his supple fingers to emphasize interior melodies. Some of his most impressive playing was during the quieter moments, when he almost made the silence between passages ripple with emotion.

Italian Concerto, BWV 971 by Johann Sebastian Bach similarly showed the artist's full command of his Steinway. At times technically dazzling and alternating between exacting counterpoint and fluid expressionism, the piece commanded your attention at every turn. This is a young artist who has truly turned the corner from youthful showman to mature practitioner.

Frederic Chopin's Scherzos are challenging to present, even by the most skilled of artists. The composer's blend of dazzling technique with contrasting introspection make them difficult to perform with any degree of integrity. Performers often sacrifice one element for the other, thus losing the overall dynamics of the music. Lang Lang found the perfect balance. His arpeggios were filled with a sense of revelation, with emotion building to a grand epiphany.There were flashes of turbulence that would suddenly descend into a whisper. The effect was breathtaking.

The overflow audience was well armed with bouquets of flowers that were showered upon the artist as he raised his arms, almost as if in triumph. It was a grand gesture which appropriately punctuated his impactful performance.