THE ROYAL ROAD: 2015 SUNDANCE SELECTION IS A POETIC JOURNEY 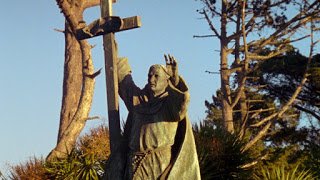 'Simply poetic' are the two words that best describe Jenni Olson's 2015 Sundance Selection, The Royal Road. This cinematic essay begins with a recollection, spoken in voice-over (we even get an official dictionary entry on the origin of the term), of the final scene of the Hollywood Classic "Sunset Boulevard," in which the central character begins to explain why he's been found face down in an aging Hollywood film legend's swimming pool, to intimations on California's colonial past and the conquest of Mexican territory from the Mexican-American to the Mission system created by Father Junipero Serro and the trail of blood and repression that became known as the 'Royal Road,' from Los Angeles to San Francisco. 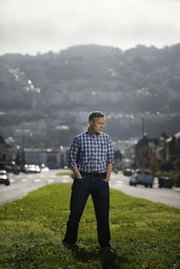 Olson's meandering journey of conscience and observation is beautifully shot in 16mm film, using breathtaking panoramas and Ansel Adams-like stills of the urban and pastoral landscape that marks the road and its distinctive Mission-bell signage. Along the way, Olson reflects on a never-realized lesbian love-affair (more like a case of sheer unrequited love than anything) and the tangential relationship between the almost never written or talked about Mexican- America War, which made My Lai look like a Sunday picnic.

Her near hypnotic voice further creates an atmospheric portrait that connects the creation of the Mission system with nostalgic shots of Mission Dolores and romantic scenes of the pineapple tree-lined Dolores Street in San Francisco and beautiful shots of Dolores Heights, Potrero Hill and the Golden Gate Bridge.

Cinematographer Sophia Constantinou's images (she also shots Olson's debut effort, The Joy of Life), uses the images of barren urban landscapes, unpopulated streets and buildings and wide-angled highway and railway shots to convey the vastness and emptiness of the director's own internal landscape. It's an unusual premise, but somehow it all works, and Olson's internal monologue leaps from the screen to captivate the soul.

Written and Directed by Jenni Olson

Narrated by Jenni Olson with a voiceover cameo by Tony Kushner