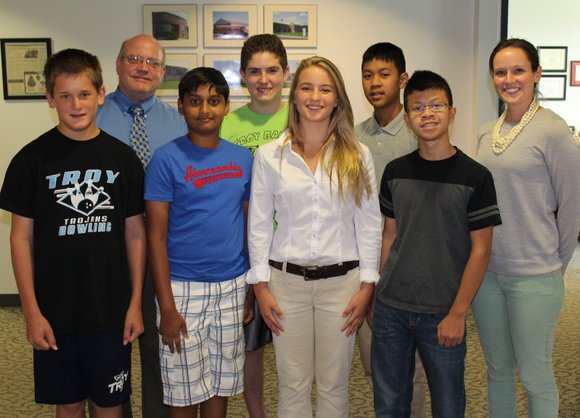 The Coding Club at Troy Middle School has created an app that can be used to make timed track trials much easier and done with less manpower.

With eight lanes, students ran their time trials eight at a time. That took four coaches, each with two timers, plus another coach to record and yet another to start things off.

The coach had an idea for a computer application that would make things easier, and she brought it to Coding Club sponsor and the district’s Director of Information Services, Ron Sarver. Maybe, she asked him, the Coding Club could design an app that had all eight lanes on one screen. She could stop each lane one at a time by herself.

Sarver loved the idea and took it to the club. The students were intrigued, and within a few months, they had developed Moran’s app.

“It blew my mind how they took something from nothing and made the idea I had in my head come to life,” she said. “I was just beyond myself. They created something really cool, and they worked hard to try to figure out all the ways it could go wrong.”

“These kids exceeded all of my expectations at what can be done at a middle school level,” Sarver said. “They did the math, the thematic construction, the planning, the project management, and they worked so well together as a team.”

“I’ve been interested in technology ever since I discovered video games as a child,” said Korben Koeborakot, now a Joliet West High School freshman. “It blows my mind even today.”

TMS eighth grader Evan Hartke said the club last year also made a calculator and their own websites. Imaad Junaidi, also now in eighth grade, said he used the knowledge he gained in Coding Club to develop a website about the Oregon Trail for his social studies class last year.

Imaad and classmate Frank Sklar also programmed a Raspberry Pi, which is an inexpensive credit card-sized computer designed to help students learn programming. Frank said he had been interested in coding before the club, and he enjoyed learning more about it with the group.

The time trial app, eighth grader Ryan Koeborakot said, was not easy to develop, but it was fun.

“It was really exciting to work on the app,” eighth grader Alexia Gorka said. “I would love to add more features to it.”

Alexia said she will join Coding Club again this year and that she hopes more girls will join with her.

Last year was the first year of Troy Community Consolidated School District 30-C’s Coding Club. Moran said she plans on using the app this year for tryouts, during the season and at meets.