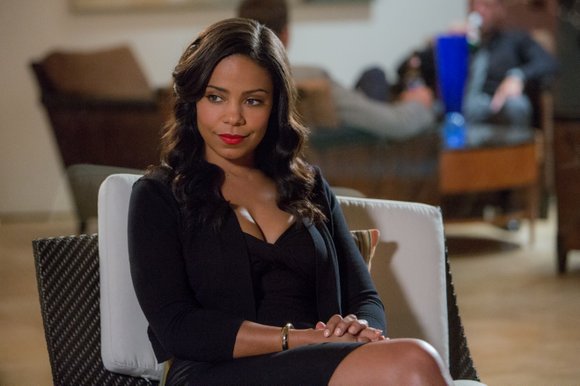 Tony-Award nominee Sanaa Lathan delivers a striking presence and undeniable energy to each project she takes on and continues to build on an already impressive career. She recently completed production on two films.

In the independent feature, Ad Inexplorata, she plays Emily Maddox, a captain on one of four spaceships making a one-way trip to Mars. The film, which was developed in the Sundance Lab, also stars Mark Strong and Luke Wilson. In the highly anticipated sequel, Now You See Me 2, Sanaa plays FBI Agent Natalie Austin in an ensemble cast that includes Jesse Eisenberg, Mark Ruffalo, Woody Harrelson, Daniel Radcliffe, Michael Caine and Morgan Freeman.

It was recently announced that she will star in and executive produce the screen adaptation of Omar Tyree’s “Flyy Girl” trilogy. Most recently, she was seen in the smash hit, The Best Man Holiday with Taye Diggs, Terrence Howard, Regina Hall and Morris Chestnut.

Sanaa starred in the title role in the play “By The Way, Meet Vera Stark” at The Geffen Playhouse in Los Angeles, a role she originated at the Second Stage Theatre in New York. She received the Lucille Lortel Award for Best Actress for her leading role in the play. Prior to that, Lathan starred as “Maggie the Cat” in the West End (London) in the critically-acclaimed and Olivier Award-winning revival of “Cat on a Hot Tin Roof.”

Among her other film credits include Contagion directed by Steven Soderbergh; Something New opposite Simon Baker; Tyler Perry’s The Family that Preys; A Wonderful World opposite Matthew Broderick; Brown Sugar alongside Taye Diggs, Queen Latifah and Mos Def; Love and Basketball with Omar Epps; and The Best Man, one of the highest grossing African-American films in history.

Here, Sanaa talks about her latest outing opposite Michael Ealy and Morris Chestnut in the psychological thriller The Perfect Guy.

Kam Williams: Hi Sanaa, thanks for the time. I'm honored to have another opportunity to speak with you.

KW: I told my readers I'd be interviewing you, so I'll be mixing their questions in with mine.

KW: Sangeetha Subramanian says: The movie Something New makes me melt to this day.

KW: She asks: What's the difference in preparing for a thriller like The Perfect Guy?

SL: You know, there's really no difference, Sangeetha. You prepare by kind of trying to create the world of the character, and by doing rehearsals. It's really about reading the script and letting ideas come to me over and over, kind of building their history, because that will naturally inform you when you're on set.

KW: Harriet Pakula-Teweles asks: What exactly is a perfect guy? And how is your perfect guy in real life different from the one your character, Leah, is looking for in the movie?

SL: I think there is no perfect guy. I believe that to be human is to be imperfect. I find that I get to know people from the inside out. So, I don't really have a type. It's more about how I feel when I'm with them. I like people who love to communicate and who have a good sense of humor. And I like a confident man, somebody who is not afraid to stand by my side and then let me shine sometimes.

KW: Harriet also asks: With so many classic films being redone, is there a remake you'd like to star in?

SL: None that I can think of off the top of my head, Harriet, but let me know if you have any suggestions.

KW: Lesley Carter says: I saw you on the Boris & Nicole show in July. I've been a forever fan! You look fantastic. We just don't see enough of you.

KW: She says: Congrats on the new movie. I'm also a huge fan of Michael Ealy and Morris Chestnut. What was it like working with those two hot, sexy

SL: It was great! I mean, who wouldn't want to go to work and look at that every day? But as sexy and as hot as they are, they're really great actors, too. And they happen to be really cool human beings. Just nice guys! They're both about teamwork and really wanting the other person to shine. I was really impressed with how they'd ask, “Is there anything you need from me?” A lot of actors are very self-centered and narcissistic. These guys are tjust he total opposite, so it was really a treat to work with them.

KW: Yeah, I get the sense that you're all very grounded from interviewing all three of you.

KW: What message do you want people to take away from The Perfect Guy?

SL: I think people are so different that each person will get their own message, depending on where they are in life. So, I just want people to come to the theater and enjoy the ride.

KW: Teresa Emerson says: I love your work Sanaa, and I'm looking forward to The Perfect Guy. But wasn't there a project for Macbeth in the works starring you and Terrence Howard? It sounded very interesting. What happened to that? Is it still being made?

SL: In this day and age, sometimes projects come and go. I don't know whether this one's ever going to happen. But once word of it is leaked to the press, it's out there forever, even though it's not really something that's certain to happen.

KW: Dr. Karanja Ajanaku, executive editor of The New Tri-State Defender in Memphis, asks: Ms. Lathan, if you were cast as the mother of Trayvon Martin, what would you try to bring to the role?

SL: Oh my God! What would I try to bring to the role? Her pain. It's really about her pain and transforming that pain into the fire that, hopefully, inspires our communities to raise our voices and create some change.

KW: Marilyn Marshall asks: Which African-American actress do you most admire?

KW: Editor/Legist Patricia Turnier asks: Are you interested in producing or directing in the future?

SL: Yes, I produced this picture, and I am actively developing other projects.

KW: Patricia would also like to know how you would describe your role of Leah in The Perfect Guy?

SL: She is a professional woman, a lobbyist who wants it all. Her biological clock's ticking and she's in a relationship with Dave [played by Morris Chestnut] who's kind of dragging his feet. So, they break it off. She then meets this seemingly perfect guy [played by Michael Ealy] with whom she has amazing chemistry. He says and does all the right things during their whirlwind romance until the day she sees a side of him that's pretty scary. And her journey goes on a real roller coaster from there.

KW: Patricia's last question is: How has your acting style changed over the years?

SL: Every role is different, so I don't think of my acting as a style. This role certainly presented some new challenges for me which were great, since I got to play so many different colors. It had romance to it... It had terror to it... it had strength... It was great to be able to play Leah Vaughn.

KW: The Viola Davis question: What’s the biggest difference between who you are at home as opposed to the person we see on the red carpet?

SL: I really have a down-to-earth, simple life. The celebrity aspect is something I really only feel when I'm out promoting a movie. My life at home is very normal. I wear sweats. I'm not always in full hair and makeup.

KW: What was your very first job?

SL: I was a cleaning lady. My grandmother had a friend who owned a building in Harlem. So, I used to clean houses on the side.

KW: Who loved you unconditionally during your formative years?

SL: Certainly my mother and father. I was very fortunate that my family was always so supportive.

KW: What was the biggest obstacle you had to overcome on career-wise on your way up the showbiz ladder?

SL: To hang in there on those days when I just didn't feel like continuing. My first acting teacher in drama school said on the very first day of class that only 1% of people who try to make a living as actors actually do it. He said one of the keys to success is persevering. So, as low as I sometimes felt, I never really allowed myself to think about the possibility of giving up. But there were certainly days when I want to.

KW: What is your guiltiest pleasure?

SL: I have so many. [Laughs] But as a foodie, I guess I'd have to admit that I love going to dinner with friends at a fine restaurant. I live for great cuisine. I just love it!

KW: The Dana Perino question: What keeps you up at night?

SL: I don't know... Nothing keeps me up right now.

KW: AALBC.com founder Troy Johnson asks: What was the last book you read?

SL: “Forks over Knives.” It's a book about how your diet can really help prevent many diseases. http://www.amazon.com/exec/obidos/ASIN/1615190457/ref=nosim/thslfofire-20

KW: Let's say you’re throwing your dream dinner party—who’s invited… and what would you serve?

KW: And what would you serve?

SL: What would I serve? I don't know. Maybe a seafood pasta with a green salad and Cabernet Sauvignon.

KW: Your co-star, Michael Ealy, gave me this question: If you could meet any historical figure, who would it be?

SL: I'd like to meet all these people, but I'd definitely like to sit and talk to James Baldwin because I love his work. It's wonderful!

KW: The Pastor Alex Kendrick question: When do you feel the most content?

SL: When I'm surrounded by friends and enjoying a conversation over a meal.

KW: Pastor Alex also asks: What do you wish other people would note about you?

SL: Nothing. It's not really about me; it's about the stories that I tell. I'm doing this because I'm a storyteller and I love entertainment, whether it's comedy, a thriller, or a drama. I think stories can reflect back to us, get conversations going about our lives. That's my passion!

KW: Attorney Bernadette Beekman asks: Do you have a favorite charity?

SL: Yes, I'm just starting the Sanaa Lathan Foundation which will be helping girls in the foster system. I'll be working in conjunction with the HerShe Group which is a great organization dedicated to giving foster girls the tools they need to stop the cycle: self-esteem, a college education and jobs.

KW: Finally, what’s in your wallet?

SL: Some credit cards... a little cash... business cards. Everywhere I go, people give me their cards... Let's see... A bunch of pennies and some earrings I took off... [Chuckles] Nothing really exciting.

KW: Thanks again for the time, Sanaa, and best of luck with The Perfect Guy.

SL: Thanks you so much, Kam.

To see the trailer for The Perfect Guy, visit: https://www.youtube.com/watch?v=CikoxQ4ytI4