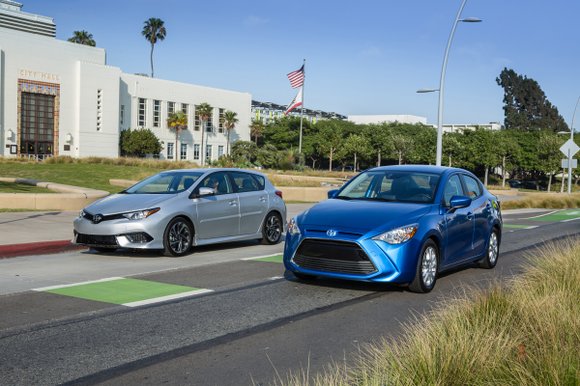 Grand Rapids, MI, -- It’s been more than 36 months since Scion has introduced a new product. That’s light years for an automotive brand to go without new sheet metal. Yes there were reasons: a tsunami in Japan, a nuclear power plant melt down there and the effort to get the volume brand, Toyota, stabilized.

Now it is Scion’s turn because that sort of lull can spell trouble for an automotive brand that has been around for only 12 years. Scion was created to attract new and younger customers and that requires distinctive products. We came here to test two: the 2016 Scion iA and 2016 Scion iM.

Both subcompacts are aimed at buyers less than 35-years-old, one is a hatchback while the other is a sedan. And they look nothing alike. The iA sedan had a familiar face with the distinctive hexagon lower grille and sharp-eyed headlights that made it stand out. It also had a piano black bumper treatment, chrome grille surround and chrome tailpipe

The sedan, it was the smaller of the two cars, had push button start, a low speed collision avoidance system, a 7-inch touch screen, 2 USB jacks, Bluetooth, voice recognition and power windows, doors and locks. The car was well equipped, especially for its price point.

It had a base price of $15,700 and $16,800 for the six speed manual gear box and the six speed automatic transmission respectively. The $795.00 freight charge is not included.

What was surprising about the iA was the interior. The material on the dash was high quality and it had a nice feel. What’s more, the entire dash was soft touch. In a place where the car could have really looked cheap, Scion went in the opposite direction and gave the iA a top-notch interior. However, the plastic template on the overhead console needs to be changed because it did look inexpensive.

On the road, the iA was quiet and stable. The engine provided enough power for everyday use. Our test vehicle had an automatic transmission which was capable and smooth shifting.

The iM too had a piano black grille and projector headlamps. Moving it a bit upstream, it had heated power folding side view mirrors with LED turn signals.

It had a sport body kit, shark fin antenna, and LED taillights with guide design and 17-inch alloy wheels. Inside, there was a 4.2-inch TFT information screen, tilt/telescoping steering wheel with audio, informational and handless phone controls.

Our car was stable on the road, it had a high seating position and there was plenty of space, head room included, for two grown men in the front seats. We tried the back seat and that too was spacious and comfortable.

There was a high rev point for the clutch to engage. We got used to that quickly and there was virtually no engine revving to find the gear. This car was smooth shifting and very docile on the road.

The only cautionary note is that Scion plans a dual launch of the cars. They didn’t have any examples of advertising, thus, at this point we cannot make a judgment. But either or, the iA and the iM seemed to be pretty good urban everyday drivers.