Stony Hill proves that in California, what is old is new again 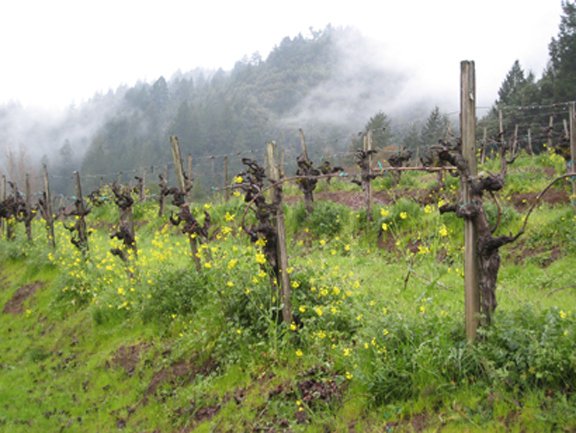 These are just four of the producers that are counteracting the notion that ripeness, butter, and oak should define California Chardonnay. Across the country, thoughtful merchants and top sommeliers are showcasing these producers – and a few dozen others -- to show consumers that the Golden State can offer elegant, restrained Chardonnay.

These producers came up last week while chatting with Sarah McCrea, the third-generation proprietor of Stony Hill Vineyards in Napa Valley. McCrea's family has been making graceful Chardonnay for more than six decades, and thanks to these newer producers, more consumers than ever before are taking notice.

McCrea appreciates the attention -- and doesn't begrudge the new kids. These wines are reintroducing America to a style of wine that went dormant for a long time she explained. They're reminding people that there's a different way to make Chardonnay.

McCrea's family has called Napa Valley home since 1943, when her grandparents, Fred and Eleanor, purchased a 160-acre goat ranch on Spring Mountain. They planted vines four years later, dedicating most of their property to Chardonnay. In 1952, the McCreas finished a small winery on their property and produced their first wine.

Especially fond of white Burgundy, Fred McCrea decided to ferment and age his Chardonnay in neutral oak, believing that new wood would obscure his wine's aromas and flavors. And he avoided malolactic fermentation -- the secondary fermentation that's standard for reds and common with Chardonnay -- preferring the tart intensity of malic acid to the softer, buttery flavors of lactic acid.

Little has changed over the past six decades. As vintners across California began chasing ripeness -- and thus, points -- in the 1990s, Stony Hill remained steadfast in its commitment to restraint. So the winery gained a reputation for delivering fresh, aromatic wines year after year. In addition to Chardonnay, Stony Hill produces small amounts of Riesling, Gewurztraminer, and Cabernet Sauvignon from its estate.

Stony Hill's winemaking style is now on the ascent. Sommeliers deserve much of the credit; their ranks have swelled over the last decade and they've convinced many consumers that elegance outperforms power at the dinner table. Influential writers like Jon Bonné of Punch and Eric Asimov of the New York Times deserve credit, too, for challenging conventions on ripeness and praising the California vintners who weren't interested in fruit bombs.

Jon Bonné chronicled California's burgeoning shift from ripeness and power toward subtlety and poise in his 2013 book, The New California Wine. But, as McCrea pointed out, New California is a bit of a misnomer.

Bonné readily admits that there's nothing new about the California wines he praises. The shift is really a return to the way things once were. As he explained in an interview last year, there's finally this realization that what made California great as a wine region is very much being explored again, and being explored in a similar way to how it was successfully explored about 40 years ago.

Consider Ridge Vineyards. The winery's style -- which the winemaker describes as pre-industrial -- has been remarkably consistent since its founding in 1959. It’s Monte Bello Cabernet Sauvignon is one of the greatest wines in the world each and every year.

Or look at the wines from Stu and Charles Smith, the brothers behind Napa Valley's Smith-Madrone. As the crow flies, their vineyard is virtually adjacent to Stony Hill. Since 1977, the brothers have ignored just about every twist and turn in winemaking fashions.

There's a market for unctuous, hedonistic wines, to be sure. But such wines aren't part of California's natural order. As Bonné continued when we chatted last year, what's happening now is really a new iteration of the pioneering spirit that put California on the world stage in the late '60s and early '70s.

Wines from popular, New California producers like Arnot-Roberts, Lioco, Matthiasson, and Sandhi are reminiscent of a bygone era. And thanks to Stony Hill, we know what that means.