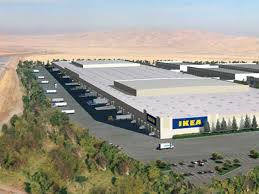 began construction on its future Midwest distribution center in Joliet, Illinois on

Slated to become operational in Spring 2018, the approximately

throughout the Midwestern U.S., as well as customer fulfillment. Goods received by

the Joliet facility will reflect the nearly 10,000 exclusively designed items

center, which will support our growing presence in that region of the country," said

Lars Petersson, IKEA U.S. president. "As we become even more accessible nationwide by opening new stores, this distribution center will help meet the home furnishing needs of Midwestern customers. We appreciate the support of Joliet city officials and staff for helping advance this project."

With nearly, 1,000 suppliers in 50 countries, IKEA globally transports products to

its stores through regional distribution centers. This Midwestern facility will

centers on the west coast and three on the east. Its central location will allow

goods to be received at coastal ports from both Asia and Europe and then transported inland to the Joliet facility. The facility's proximity to a nearby railroad

In terms of contributing to the local economy, this project will result in

construction-related jobs and nearly 100 positions at the distribution center, plus

renewable energy presence at nearly 90% of its U.S. locations.

Illinois. Besides this future Joliet distribution center, there are two IKEA stores

in the Chicagoland area, in Bolingbrook and Schaumburg. Additionally, last year,

IKEA purchased a 49-turbine wind farm in Hoopeston, IL that is now operational.

Since its 1943 founding in Sweden, IKEA has offered home furnishings of good design and function at low prices so the majority of people can afford them.

There are currently more than 380 IKEA stores in 48 countries, including 41 in the U.S., where there also are 5 operating distribution centers. IKEA incorporates sustainability into day-to-day business and supports initiatives that benefit children and the environment. For more information see IKEA-USA.com