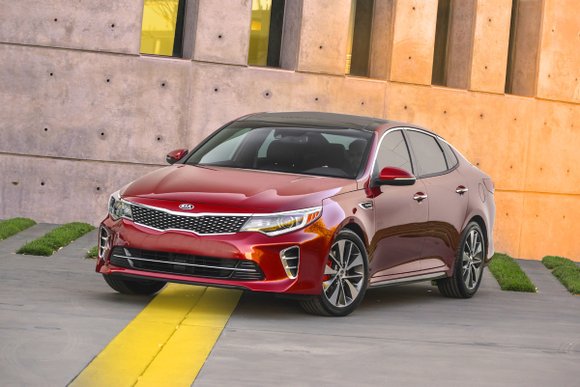 The Kia Optima has arrived. Yes the 2016 model has been on sale for months but we’re not talking about the car. This is about what the Optima stands for. It’s mundane and that is a good thing.

Yes, mundane can mean unexciting, banal even boring. But in this case the Kia Optima has reached a certain level expectedness. First, it has joined the ranks of the top-notch mid-size sedans in this market.

As such, a Kia Optima is expected to be stylish, to be comprised of a quality build, to be chock full of creature comforts, to be unobtrusive in everyday use and to handle the mundanity of everyday living without any drama. For the last few years, the Kia Optima has delivered on all those points. And for 2016, the sedan has swelled with value.

We had the EX trim line which is in the middle of a five trim series. There is an LX, LX 1.6T, an SX and an SXL. The tester was equipped with the 2.4-liter four cylinder engine that made 185 horsepower and 178 pound-feet of torque. It was mated to a six-speed automatic transmission. Although it has more horsepower than the 1.6-liter turbo, it is not by much. The 2.4-liter is really the base engine in a three-engine lineup.

The 2.4-liter was a little noisy under hard acceleration but it was efficient. The EPA rating was 24 mpg in the city, 35 mpg on the highway and 24 mpg combined.

We discovered one of those ghosts rattles inside the car. It sounded like something was loose on the passenger side. First it was in the front and then it was in the rear. We couldn’t find it. What’s more, if we had time to take it to a dealer, we’re sure it wouldn’t make a peep when a mechanic was looking at it. That’s the way these things work. But that was our only quibble with the car.

Acceleration was good, handling was excellent. And there wasn’t any torque steer in the front-wheel-drive Optima. This was an easy car to drive. Once we threw a few grocery bags on the back seat and it just swallowed them up. The 2016 Optima is bigger, meaning it is longer, wider and taller than the model it replaced. In other words, the car was a lot roomier and that showed in the back seat which had plenty of room and in the trunk which was a cavernous 15.9 cu.-ft.

The 2016 Kia Optima’s design is evolutionary. But there are changes in its sheet metal that are subtle. The sheet metal was tauter over the wheel arches and the swept-back headlights reach deeply into the fenders. Gone is the space been the grille and the headlights. It looked like one piece.

Kia said, “The greenhouse silhouette maintains the raked A-pillar and sweeping C-pillar that lend the Optima its sport-sedan shape. The rear quarter windows kick up smartly just ahead of the carved rear fenders. As with its predecessor, the all-new Optima incorporates a raised deck lid, and the use of available LED halo-style tail lights…”

The car looked good on the inside too. There was a bunch of soft touch materials beginning with the dash and leather trimmed seats. The instruments had a horizontal layout and the sightlines were good. In other words, it was easy to see out of the car because the A-pillar didn’t obstruct sight lines especially during cornering.

Add that to the usual comforts: satellite radio, Bluetooth, voice controls, auxiliary and USB jacks supplemented with 12-volt outlets and the base price of $24,890 doesn’t seem believable. It is not. The premium package comes in at $3,700 and the audio package was another $1,200. Add that to the $825 freight charge and the total for our 2016 Optima EX was $30,615. That is still unbelievable for that much stuff in a pretty good midsize front-wheel-drive sedan.