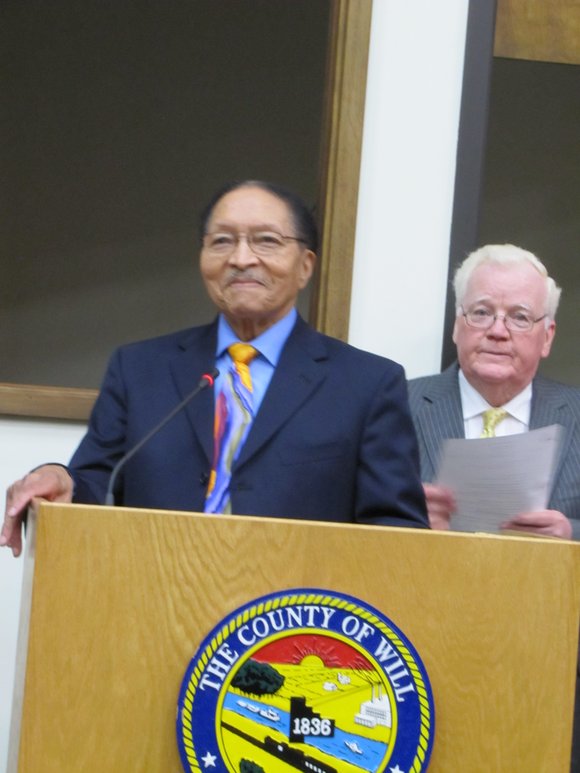 Building a successful business is hard. Building the actual building your business will operate out of is an even more daunting task.

Local business owner Percy Conway, who did both, was honored by the Will County Board this week on the occasion of his 50th year in business.

Conway opened his namesake Conway’s Hi-Style Beauty Center and Barbershop, 3226 S State St, in Lockport in 1966 after having built about 80% of the structure himself over a period of years.

At age 19, Mr. Conway first came to the Joliet area in 1950 from Mississippi looking for more job opportunities.

He served in the Korean War where he achieved the rank of technical sergeant before returning to the Fairmont neighborhood where he worked and lived.

While serving in the army, Conway perfected his skills as a barber where word got around with the officers that he was pretty skilled with the clippers.

“Things like that motivated me to want to pursue cutting hair when I got out of the military," Conway told the Times Weekly in February.

He married his wife of 35 years, Armelia, in 1955 and bought a home in the Fairmont neighborhood, where they raised their 4 children.

He worked a variety of jobs including one at Mastic Tile while he pursued his barber license and worked to secure a commercial lot, and funding to build his salon.

Despite a lack of support for black business owners from the banks, Conway was able to buy lumber on credit, enlisting help when he could, but doing most of the construction himself.

“I got another carpenter to help me with the floor and another to do the roof, but the rest of it, about 80 percent, I did myself, working on my days off; board by board. Nail by nail," said Conway.

The Will County Board also recognized Conway’s service to the community. Until his retirement in 2013, he served as a commissioner on the Lockport Township board, as well as on a number of public service commissions.

He also worked as an advocate for the small community of Fairmont which is located between Joliet and Lockport. His work for Fairmont included a push for federal assistance to install water and sewer infrastructure.

Today, Conway has 9 grandkids, 2 great-grand kids, and two of his daughters work at his shop said county board member Lauren Staley-Ferry at the county board meeting on April 21.

Conway said he was honored by the recognition and the fact that a county board member would take the time to personally visit his shop to invite him.

“I humbly accept this with the greatest appreciation,” Conway told the board.