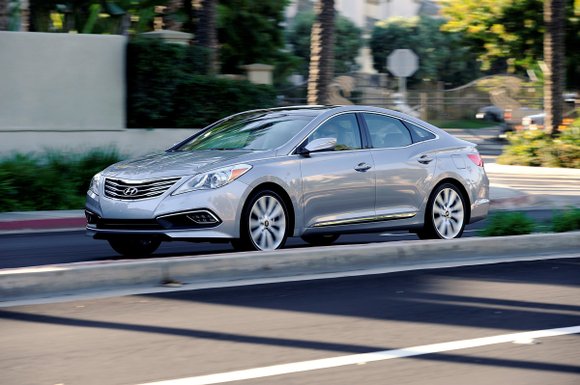 Hyundai’s 2016 Azera is a great car. The Korean automaker called it a premium sedan. But this car to us qualifies as a mid-size luxury performance sedan.

Luxury starts with the interior. Our test car had a sumptuous black leather interior that was both comfortable, stylish and perforated because there were heated and cooled. The rear seats were supportive, cradled like a glove and there was plenty of head and leg room. Our only quibble is that rear doors had to be wide open to get in comfortably.

The interior had an ambience. Everything seemed to flow wing-like out from the traditional center stack which acted like a spine. The touch screen was at the top, the audio controls were under it and the climate controls followed.

The instruments were traditional too. Within the pod in front of the driver, two circles held the odometer and speedometer with a TFT screen between them. The steering wheel had audio controls and the controls for adaptive cruise control and the hands free phone were there too.

There was an abundance of storage space. At the base of the center stack a storage compartment held the USB and auxiliary jacks. Some things could be stored in the space behind the floating center stack. The cupholders were hidden next to the console gear shifter and there was the center console itself.

Under the hood was a 3.3-liter V6 that made 293 horsepower and 255 pound-feet of torque. Mated to a six-speed automatic transmission with manual shift capability, this combo had understated power and it was super quiet.

The Azera powertrain also had an Active Eco mode, which modified engine and transmission control for improved fuel economy. We never tried it. The car had an EPA rating of 19 mpg in the city, 28 mpg on the highway and 22 mpg combined.

Handling was really good. Acceleration was effortless; the Azera seemed to have more horsepower than it did. Build quality was good. When we took the car over a stretch of really ruddy road, we didn’t hear any squeaks, didn’t feel any vibrations and sensed no harshness. The suspension gave the car a very smooth ride that seemed to us to be just right. It was not too firm or too soft.

The car had what Hyundai called lane change assist. It measured the distance closing rate of a vehicle in an adjacent lane to help determine if changing lanes was safe. If not, there were audible and visual alerts in the respective side mirrors.

The 2016 Azera looked good too. Hyundai calls the styling “Fluidic Sculpture” meant to simulate the mechanics of flying. The exterior was long, light and low. There was an undulating beltline that enabled a long sleek roofline accented by the third window and wraparound LED taillights.

The automaker said, “A monoform side profile includes flowing lines into the rear quarter panel. The face is masculine, with a powerful, winged chrome grille and available HID headlamps that integrate precise details, coupled with LED fog lights on the Limited model. From the side, the stance is complemented by large-diameter multi-spoke alloy wheels.”