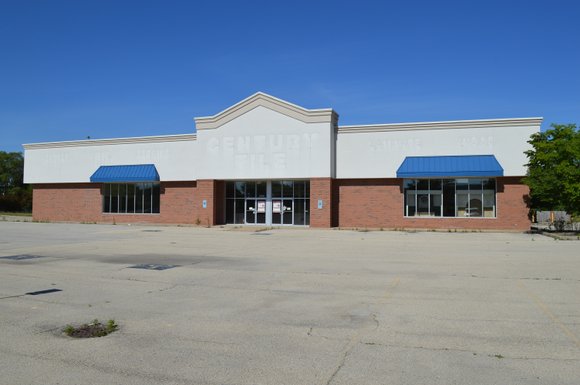 The former Century Tile building at 1395 Larkin Ave. in Joliet. Photo by Brock A. Stein

The possibility of a blood and plasma center in the old Century Tile building on North Larkin Avenue wasn’t enough to get the Joliet City Council to reconsider its denial for a used car dealer to operate at the site.

On Tuesday night, the Joliet City Council voted to uphold its June decision to deny a special use permit for Drive Time, a national used car dealership that specializes in sub-prime loans for customers with bad credit.

City Manager Jim Hock told the city council on Monday that the new proposed use could see the site subdivided into smaller retail sites one of which “would be a blood and plasma center where they would actually purchase the blood.”

Hock told the council during the pre-council meeting that the city’s current zoning would allow the blood and plasma sales without any further approval needed.

He indicated that the site’s current run-down state would “remain the same” with no landscaping and no new fencing.

The city manager said that the owners of the building have received identical offers for the site though the real estate holding company representing the blood and plasma concern would be unable to close on the sale until the fall. Drive Time was able to close on the property within 10 days, he said.

The city council failed to garner enough votes to rescind their former resolution denying the special use for the car dealership with council members McFarland, Quillman, Turk, Gavin and Hug voting against the measure. Council members Morris, Mudron and Gerl voted for rescinding the prior denial of use.

Drive Time planned to invest about $750,000 in upgrades to the site, 1395 N. Larkin Ave., which would have included new privacy fencing, improvements to the building, and resurfacing of the parking lot.

The plan in June met with plenty of push back from neighbors who cited a perceived oversaturation of used car dealerships in the city and the perception that the city was taking any business that came along including pay day loan stores, gold buying store fronts and title loan operations. Some also felt that the Drive Time location would scare away a potential tenant for the soon-to-be vacant Thomas Toyota that will soon depart for Romeoville.

Century Tile owner John Boyle, who spoke on behalf of the project moving forward in June, said that his company, couldn’t generate enough sales—approximately $12 million per year—at the Joliet location to maintain the business there.

Boyle said that Drive Time’s business model would have generated more sales tax for the city selling an estimated 75 cars per month at the location at about $6,000 to $14,000 per vehicle.

Despite being denied approval in April and May by the city’s planning and zoning board, the city’s administrative staff moved the proposal to the full city council for approval citing the planned investment and improvements.