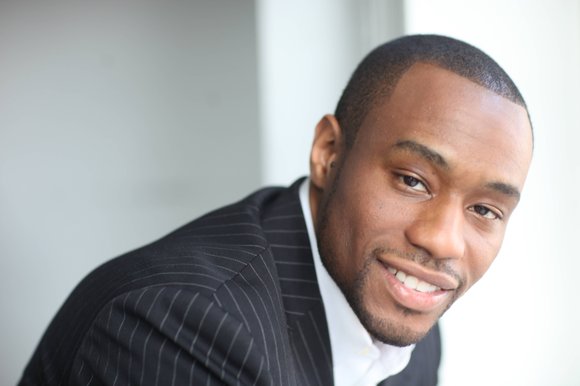 for selling loose cigarettes on the street in Staten Island. The

question isn't are these people perfect, but rather are they subject

to a level of surveillance, policing and punishment commensurate with

their crimes? I want to live in a world where you don't have to be

perfect to survive. I think Mike Brown is a perfect representation of

Black Lives Matter precisely because he isn't perfect. He still

KW: Do you think video games and gangsta' rap might have contributed to the

image of the black male as violent and dangerous, perhaps causing

cops to have an itchy trigger finger around them?

B-roll footage of black people being violent doesn't help, but I

think there's a deeper cultural problem that we need to wrestle with.

There has never been a moment, since the birth of White Supremacy,

when we didn't think black people were violent.

KW: In your conclusion you say, "Empires eventually fall, and that freedom

is closer than we think." Are you expressing your expectations

MLH: I'm saying nothing lasts forever, whether it's Greece, Rome or the

British Empire. It doesn't mean that America has to end. The country

democratic and less imperial in nature. We're trying to radically

reshape the nation in ways that are more just and fairer. That's what

I mean when I say that empires eventually fall. I'm not calling for

the end of America. I'm just calling for a reimagination of its

KW: Still, I wonder why you would start your book with Mike Brown, if you want

MLH: It wasn't my choice to start with Mike Brown. Remember, since August 9,

2014 we've seen the most protracted resistance to police violence in

KW: I'm also concerned about situations like the City of Flint, where corrupt

politicians were all too willing to commit crimes and ruin children's

lead. How many other Flints do you think might be out there right

MLH: These are acts of civil evil. These are crimes that only happen when you're

poor, or black, or brown or severely disenfranchised. This is not

just about people making mistakes or being indifferent. There's a

system installed that allows this to happen.

KW: Where do you see the country headed because of the rift being created by

MLH: I think there's rift, but it's a false dichotomy suggesting that we have to

choose between critiquing state violence and people who shoot police