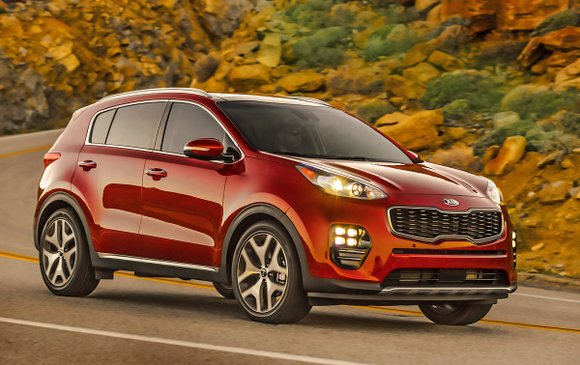 We had the privilege of test-driving the 2017 Kia Sportage crossover at its springtime launch in San Diego. If you’ve ever been in that part of the country, then you know there are certainly mountains laced with a lot of two lane highways, sweeping curves and the expressways are as wide as runways although they can be clogged with traffic on a daily basis. The Sportage handled itself well.

But we recently had the opportunity to test drive the fourth generation of the Kia Sportage in the close confines of urban America. Here too, the crossover earned road warrior honors.

Its stiffer frame handled the asphalt patchwork of some the streets here. The road surface from that kind of patching is uneven and that is being political correct. The ruddy surface of Outer Drive from Seven Mile Road to Livernois was about as ruddy as a test track designed to assess noise, vibration and harshness.

The 2017 Kia Sportage thumped over that street with hardly a peep. The reverberations gave an indication of the small crossover’s solid build. And those thumps remained outside of the Sportage where they belonged.

We had the 2017 Kia Sportage EX AWD and it was powered by a 2.4-liter direct injection four-cylinder engine that made 181 horsepower and 175 pound-feet of torque at 4,000 RPM. Mated to a six-speed automatic transmission, the combination had oomph just were it was needed. From 45 mph to 75 mph, the Sportage could move. On narrow-lane urban expressways that is a critical power window and the 2017 Kia Sportage handled it well.

Our test vehicle had an all-wheel-drive system that was front-wheel-drive under normal driving conditions. When it detected wheel slippage, which is rare even here during summer months, torque is sent to the wheels that need it. However, the Sportage does have a locking differential that will lock in a 50/50 torque split no matter the driving conditions. We never used it.

The new Sportage garnered a few compliments. Its new design mixed curves with sharp creases. It had Kia’s trademark tiger-nose grille combined with high positioned headlights that swept back along the outer edges of the hood. It had a lower wider front clip that Kia said provided better engine cooling and from a design standpoint made the Sportage’s front face look fuller.

Although the new Sportage was wider than the model it replaced, the wheelbase was longer and the overall length was increased by 1.6 inches. That doesn’t sound like much but it translated in to a roomier interior.

The Sportage was really slick looking. It had a sloping roofline and sharply raked rear window. Short rounded overhangs with the wheels pushed to the corner were part of its signature. The spoiler was longer and more robust; the wheel arches were more pronounced which gave the 2017 Kia Sportage a more aggressive look.

Inside, Kia called the design of the dashboard lateral, a more common term would be horizontal as opposed to vertical. The display zone as Kia called it transmitted information via the instrument panel and a color touchscreen, which was canted 7.2 degrees towards the driver. The lower half held the switchgear in what we call a reverse waterfall setup.

The seats were comfortable. There was plenty of space in the front pair and the rear set had plenty of room as well. Kia lists the Sportage as a five-passenger crossover. A third person probably could be comfortable in the third row for a short haul but we don’t know about the long run.

We had a black leather interior and a panoramic roof. There was a TFT screen between the odometer and the speedometer. And our test model featured Kia’s premium package which included the glass roof and added power folding mirrors, blind spot detection, lane change assist, cross traffic alert with the rearview camera, the heated seats and automatic dimming mirrors and LED interior lighting.

About the only thing was found to gripe about was that we couldn’t play Pandora through the app on our iPhone. But the Sportage’s infotainment system would play our music file off of that phone.