“Writings on the Wall: Searching for a New Equality Beyond Black and White”

by Kareem Abdul-Jabbar and Raymond Obstfeld 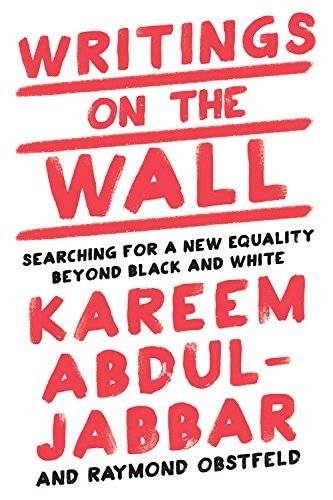 The fix won’t be quick.

It never is. There’s no magic wand to change the things that’ve been on your mind lately: social issues, inequality, poverty, politics, apathy, violence. Those ills didn’t arrive quick and they won’t leave quick but, says Kareem Abdul-Jabbar, they can be repaired. In his new book “Writings on the Wall” (with Raymond Obstfeld), he explains…

When people ask Abdul-Jabbar what he might’ve become, had he not played NBA basketball, his answer often surprises them: he would’ve been a history teacher. History fascinates him – especially in the way it reflects racism, religious intolerance, and gender issues. In history, as in current events, the truth is sometimes bent.

Take, for instance, politics, which is on everyone’s mind. We rail and complain about issues and promises broken and we like to think it’s all out of our hands. The truth is that we are the problem: we grow complacent about things we don’t want, acting “like children when it comes to politics” and hoping the government will “take care of us,” rather than taking steps to fix the system ourselves.

White people may deny that racism exists, says Abdul-Jabbar, while Black people know that it does. Racism didn’t stop with the election of the nation’s first Black president. It doesn’t end with melting-pot cultural appropriation. It actually comes in two forms, he says, and education is the first step in dealing with it, not eliminating it, because racism is always going to be around.

On religion, we should never lose sight of the fact that this “country was founded by religious outcasts running for their lives from persecution for their beliefs.” When it comes to equality for women, we must embrace the true meaning of “feminist” and adhere to what we tell pollsters when it comes to gender. We need to look at the media and how to maximize its potential, and we must take better care of our seniors.

“We cannot afford to just wring out hands and depend on the kindness of strangers,” Abdul-Jabbar says. “We have to bring about change on our own.”

Remember when your grade school teacher told you to put on your thinking cap? You’ll need it again as you’re reading “Writings on the Wall.”

Authors Kareem Abdul-Jabbar and Raymond Obstfeld don’t just examine issues that are on the minds of every American. They turn them over and blow them apart, looking for solutions that can be accomplished and chiding us gently for not already working. That makes for a thought-demanding, intellectually heavy book but it’s also a worthy call to action; you may also be delighted to see that Abdul-Jabbar doesn’t miss a chance to add a touch of the personal here, which includes quietly unexpected humor.

Readers with the right mindset will find this book to be informative and entertaining but be prepared to take your time get the most from it. There aren’t a lot of pages inside “Writings on the Wall,” but what’s here is deep and wide and nowhere near quick.