Dear EarthTalk: When did scientists first discover that carbon dioxide levels were rising in the atmosphere due to human activity and that this could cause global warming? 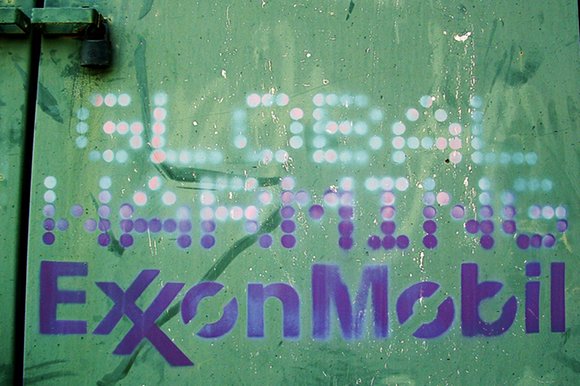 Exxon Mobil knew as early as 1977 that our enthusiastic burning of fossil fuels was leading to global warming — and since then has spent upwards of $30 million to promote so-called climate denial. Credit: Megan, FlickrCC.

The Earth’s climate is continually changing. Since the planet was born some 4.5 billion years ago, it has undergone ice ages and warm periods due to natural changes in its orbit around the sun and other factors on its surface. But since the Industrial Revolution, humans have been the main factor in the Earth’s warming. Since pre-industrial times, the Earth’s surface has warmed some 1.5 degrees celsius. And with 2.4 million pounds of carbon dioxide (CO2) being released into the air every second, we are on track to get a lot warmer still. So when did we realize climate change was happening and who is responsible?

The science behind climate change was first understood by Swedish chemist Svante Arrhenius in 1896; he thought the results would be positive for humans. Arrhenius realized that burning fossil fuels would have a greenhouse effect on the planet and would likely warm the planet by several degrees. Throughout the 20th century, the planet’s human population increased by more than 280 percent and CO2 production increased by more than 1160 percent. As the climate warmed, more and more scientists started to realize that human activity must be to blame. By 1959, worry among the scientific community increased as some scientists projected that CO2 would increase with potentially “radical” effects on climate.

But it wasn’t until 1995 that the Intergovernmental Panel on Climate Change gave a definitive statement that humans are responsible for post-industrial global warming. As of 2010, there was a 97 percent consensus among scientists that climate change was caused by humans.

So why haven't we fixed the situation? The answer may partially lie in the part large energy corporations played in swaying public opinion. As InsideClimate News reports, ExxonMobil was aware that anthropogenic climate change was likely as early as 1977. Since then, ExxonMobil has spent more than $30 million on think tanks that promote climate denial. While it can perhaps be pardoned for opposing climate change research when the science was still inconclusive, ExxonMobil continued funding climate change denial groups as late as 2009—well after our carbon emissions were established as the cause of climate change. ExxonMobil even helped found the “Global Climate Coalition,” a lobbying group that prevented the U.S. from taking action against limiting greenhouse gas emissions.

And ExxonMobil isn’t alone. Koch Industries, a Kansas-based multinational with big investments in oil and other fossil fuels, has donated over $88 million to climate change denial. Chevron, BP and others also fund such efforts. The actions of these companies have had a profound impact on public opinion. According to a recent survey by the Pew Research Center, the U.S. has the highest carbon emissions per capita in the world but “is among the least concerned about climate change and its potential impact.”

Confronting ExxonMobil and other corporations that give misleading information to the public is important because this issue affects all of us. Non-profits like Greenpeace are trying to make sure oil companies stop obfuscating the truth and start promoting cleaner energy. Regardless, our commitments at the Paris climate accord have the U.S. and the rest of the world on the right path toward reducing emissions, no matter what the oil companies say about it.